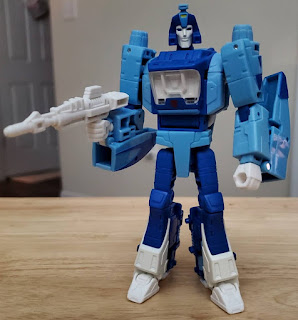 If I listened to other people regarding toys, I'd have probably skipped over the new Studio Series 86 Blurr figure. There's been a little derision regarding him due to factors like his arms and face sculpt. None of that bothers me much at all. I expect a little alt mode kibble and what's here is easy to ignore.

His face doesn't bother me. In the cartoon, sometimes it's longer than others. I think it looks fine, and to be frank, I'm really impressed with this toy. I picked it up at Walmart this past weekend and found myself looking at him while I walked around the store constantly. I've always really liked Blurr's colors. I know, I know... it's just two shades of blue and a little white. It also looks super sharp. There's elegance in simplicity.

True to his classic design, Blurr turns into a Cybertronian race car. It's meant to be sci fi and represent the way off future of 2005. I suppose they envisioned in twenty years cars would only seat one or two and have enormous bodies. Blurr is also some sort of hover car and doesn't have wheels. It's cool looking.

Transformations is really easy. The legs fold up to form the car's backside while the arms form the sides with a few twists and folds. His torso makes up the canopy and front fender. Considering how compact everything folds up and how easily it does, I'm kinda amazed I got it right on the first try.

Blurr comes with the rifle he you saw him using often. I do wonder if some of these guys will get re-released with Targetmasters at some point. For a specific homage to his original animated appearance, it's a great accessory. He also has a welding tool attachment so you can recreate that scene. That's a nice little extra that could have been left out, but I find nice that was included. Both the gun and welding tool can be stored in car mode for an attack mode. I literally have nothing bad to say about this toy. I really like it. Prior to this my favorite Blurr toy was the Shattered Glass figure. I like the mold and just think it looks cool. This time they nailed it. It looks just like Blurr I've seen on my TV and happens to be a good toy while doing so. Twenty dollars well spent y'all. 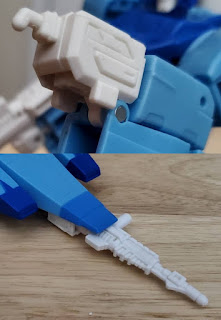