Vertebreaker, Will Slap Your Face 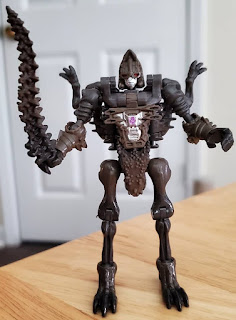 With some Christmas Amazon gift card money, I was able to snag a Kingdom figure before they were only from third party sellers at thrice the price. Fortunately it was one of the new Core Class figures, a new scale I've been really wanting to get my hands on.

For those not completely in the know, Kingdom is the third part of the War For Cybertron trilogy that's been going on in the Transformers Generations toy line for the past few years. No, it's not tied to the game of the same name, but the Netflix animated series. Kingdom is a mix of traditional and beast era Transformers. As a fan of both, I'm pretty excited for this. 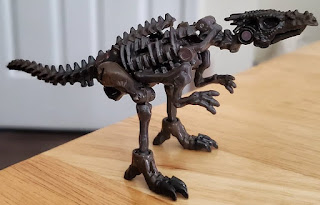 A Dracorex may or not be an actual dinosaur. I'm not a paleontologist, but I'm pretty sure dinosaurs weren't actually robots from outer space. So I'm not very concerned with scientific accuracy here. Skeletons usually can't walk around on their own either. That's just how important inner strength is yo, and this little dinosaur skeleton is a pretty strong lead into Kingdom.

Vertebreak transforms pretty easily, everything just folds into place naturally. You'll probably be able to do it just by looking at the toy. You also probably noticed the backbone of mine sticking up in the picture. I couldn't get it to stay in place. Either from plastic quality or maybe I did something wrong. Her tail turns into a bone whip or sword that I just dig.

That's one of the weird thing from beast era toys that my appreciation of depended on the figure itself. In this case I like it, it looks gnarly. I like this toy overall. The idea of a skeleton robot that turns into a skeleton dinosaur is just awesome. Vertebreak as a name has been used before, but really fits here perfectly. As a character, Vertebreak is a female, but the mold isn't overtly feminine. I can see it being used for a variety of male and female characters. Which is my way of saying I want a lot of repaints. Gimme a glow in the dark or a translucent one.

The new Core Class is pleasantly small. I often feel like Transformers toys are too big, so scaling them down a little brings out more detail and just overall feels right to me. I don't know if this return to beast era is limited to Kingdom or if Kingdom is Hasbro's way of working beast back into Transformers. Personally, I hope it's the latter. But I'm sure you knew that.