These Two Are Buzzworthy 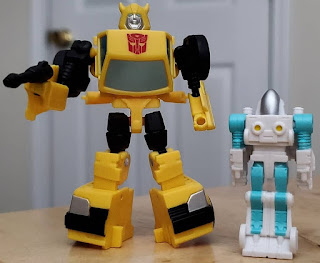 While taking the wife shopping for her birthday this past weekend, I stumbled across the new Bumblebee and Spike set. This 2 pack is part of the new Target exclusive Buzzworthy Bumblebee line that as you can guess focuses on Bumblebee. The line mainly reuses older molds from various lines (movies, Cyberverse, etc.) aside from this one. This is a new Core Class figure that's either getting left out of Kingdom or the mold itself will get used differently later on.

I've been speculating that Core Class is going to be staying around for awhile, so seeing the usual players in the class isn't surprising. I'm pretty sure this mold will get used in different colors and likely different heads. It looks like it could fill in for a few different bots. I'm not sure where the Spike comes from, maybe the new 1986 Studio Series figures has a Daniel in exosuit included. It's a neat little minifigure that I'd like to see get plenty of use.

I like Bumblebee and Spike, but I don't like transforming Bumblebee. Spike is fine, he's not much more than a Targetmaster. Just fold them legs up and keep his arms down. Now he's in that vehicular mode exosuits have. It's pretty simple.

Bumblebee's alt mode is a generic sporty hatchback. The transformation itself isn't terribly bad, but getting things to lock into place was a pain. It's either the plastic being used or the engineering. Like it's designed too exact or off a hair somewhere. I kept popping his arm off trying to get it into place. Once it was there though, I was happy.

It does have weapon storage inside the alt mode. That feels like a lost art these days with guns hanging off the sides of vehicles. Aside from the transformations annoyances, I'm pretty happy with the set. Looking forward to future uses of it and the Core Class in general. I like Spike a lot as well. Core Class generally costs around $10 right now, this was $15 with the addition of Spike. I'd gladly pay the extra for more partner figures. I uh... like partner figures.