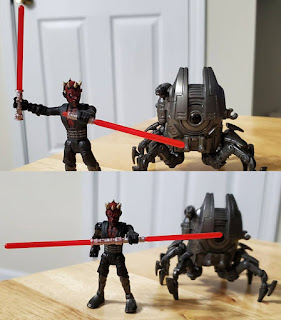 I've been a fast fan of the Star Wars Mission Fleet toys, specifically the Gear Class (standard/basic class). While the larger vehicles are cool, the charm is in the way cool accessories they package with the figures. Jet packs, little helicopters, and jet skis really add something to the little figures.

I've been speculating this is a result of Hasbro's Micronauts line they had planned that never materialized (maybe it will eventually). I don't know if I'm right, but they sure do seem Micro inspired. I love Star Wars, and adding in some extra far out to the mix is a welcome addition.

After what felt like an eternity, Hasbro has finally graced store shelves with a second wave of Gear Class. It's a small wave. A repeat of Boba Fett, a Clone Shock Trooper (good repaint of the wave 1 Clone Trooper), and Darth Maul. Darth Maul here is as he appears in the various animated series. Not dead and with robotic legs. Spoiler alert: He got cut in half in a movie that came out 21 years ago. 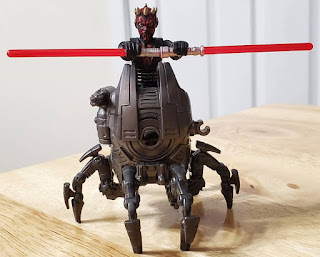 Like all Mission Fleet figures, Darth Maul is a mini figure with a pleasantly rubbery plastic. The toy is decently articulated and has that distinct sculpting that the Mission Fleet toys have. Think of a cross between a classic Kenner Star Wars figure and an Imaginext figure. He has that 5 points of articulation a Kenner would, but the shoulders of an Imaginext. For such a basic toy, it gives him an extra touch of movement that's pretty nice.

Maul has his trademark double lightsaber. It's just as awesome as it was when I first saw it in 1999. His included accessory/vehicle is a spider droid that doubles as his spider legs. The spider unit is pretty neat, some of the legs swivel for posing or stability. There's a spot for lightsaber storage and it has amounted gun. Darth stands on a little platform with foot pegs to ensure a snug fit. It's a chunky representation of his cybernetic spider legs that's hard not to like. It's a badass little figure from a neat little line. I dig it.