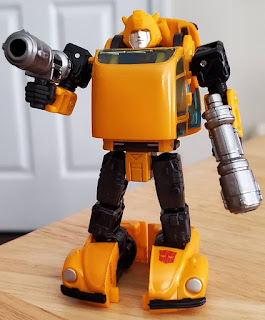 One of my Christmas gifts from my wife was the new Netflix deluxe Bumblebee. Part of the War for Cybertron series exclusive to Walmart, I was really excited when I opened him up. I really wanted this one. Y'all know I love me some Bumblebee. Unlike prior Classics or Generations style Bumblebee figures, this one turns into his classic VW Bug alt mode. I've never complained about the sporty hatchback they've used in it's place, but man I do love that classic look.

Bumblbee is a re-shelling of the skeleton used for Earthrise Cliffjumper (I also have him). Which means literally the same thing it meant for the G1/Microman versions of the toy. Same skeleton, different car parts and head. So if you liked one, then you'll like the other. Probably.

There's also a Bugbite and Hubcap version of the mold and I must get the Bugbite. Ever since that old E-Hobby set, I've had a thing for Bugbite. I'm going to say Bugbite one more time. 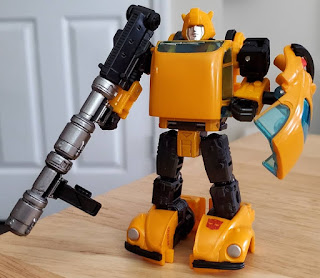 Bumblebee has the same big ass gun that Cliffjumper had. It can be split into 2-3 smaller guns, which fit Bumblebee better. The back stock of the big gun can be unfolded and used with the guns, but all I could ever come up with was a panini press which is just silly. He's fighting a War for Cybertron, there's no time for lunch.

The back windshield/roof of the car can also be used as a shield. Which anyone who's had a pine comb fall on their car while driving or a rock hit their windshield can tell you is a horrible idea. But once again, alien robots from outer space who disguise themselves among humans as dinosaurs. Reality isn't their strong suit. 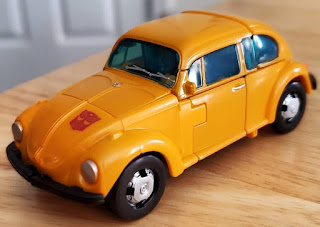 Bumblebee is exactly what you'd be expecting when buying a War for Cybertron toy. That's a very faithful updated toy of a classic character. There's no mistaking classic G1 Bee when you see him and that's him 100%. As a toy he's pretty well articulated with a variety of joints. If scales your thing, you should be pleased that he's fairly to scale with other Generations figures appropriately to character. I think that made sense.

Transformation isn't too difficult, though I did have problems getting everything to fit in at first. I admittedly use baby hands when transforming these things as to not accidentally break my toy. I have big grown man hands things can happen. That being said, I couldn't get that back portion to sit in flush with the rest of the car. I probably did something wrong.

Overall, I really like this figure. Not in that "Rob likes everything" way (I'm that weirdo that enjoys his hobbies), but as in I was very pleased with him outside of expectations. I've been a fan of the War for Cybertron toys (as you know) and this is another really good one. It feels like Bumblebee walked off my TV screen and awkwardly posed on a TV tray in my living room.