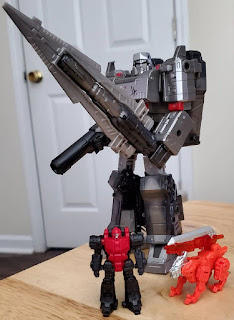 Another of the Christmas gifts from my wife was the super cool Megatron with Pinpointer and Lionizer set exclusive to Walmart. This is both winners with chicken dinner for me as I love toys with partner figures and the Siege Megatron mold as is. The more premium looking chrome paint on said mold is irresistible. This toy is part of the Netflix series and is intended to represent Megatron as he appears on the show. Considering how toy accurate the shows CGI models are, I'd say it does that pretty well.

It's a really good updated version of classic Megatron. It looks pretty much just like you want him to look. No he doesn't turn into a fucking gun. He turns into a tank like usual. You that saying "I remember when Mtv played music?" It's been longer since they haven't than they did. Things change, and sometimes it was a long ass time ago.

I really wish the Battlemasters were in the Netflix show. They're not, but they are in some of the sets. I love a good partner figure and here we've got a neat situation. Instead of just throwing some in their for Megatron to have, these are his captives. Just a little bit of toy only fiction, but it's appreciated. These two are being forced to serve Megatron. Considering their alt modes are weapons, that's some pretty dark stuff. 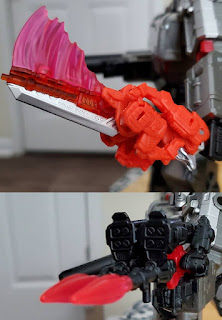 Lionizer is a catbot that turns into a sword and Pinpointer has a more traditional bot form that turns into a double barreled gun with some sort of cluster bomb attachment. That's the fun thing about Battlemasters. Instead of just generic guns, you get a variety of weapons. Like other Battlemasters, they come with action effect thingies. A swoosh and two pew pews. A Battle is getting mastered with flair.

If you haven't had any experience with this mold, he's quite the treat. Plentiful articulation and a transformation with just enough steps to please almost everybody. It's a pretty good toy all around and a great Megatron. So much a perfect Megatron that the only other character they could make with it is Archforce. That's not a bad thing though. Often they get so creative with Megatron designs, he could be anybody. So much so that you wonder why didn't they just make a new character. Having a Megatron that without any kind of doubt is Megatron is the perfect thing to do here.

In case it wasn't clear, I like the toy. It's a good looking version classic Megatron that 100% fits the part. From his fusion cannon to sword, he looks like a happy marriage of the old box art and cartoon made into a pretty great toy. The shiny chrome is offset by the 'battle damage' that I personally dig. Megatron has been through hell and it looks like it. He's fighting a War for Cybertron after all. I also love the inclusion of the Battlemasters. Partner figures is a toy gimmick I never get tired of and with the additional fiction of these being his captives just feels like something Megatron would do. The black and orange colors looks good on the little guys too. This feels more like something I would have gotten as some sort of convention exclusive rather than a store exclusive set. That's hard not to appreciate.