Kong's Going To Whoop Your Ass 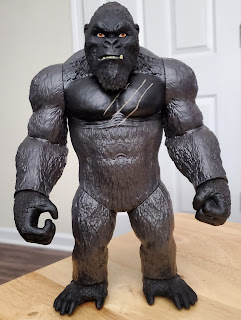 One of the Christmas gifts from my Mom was the Giant Kong figure by Playmates. Seeing how a certain trailer is pretty popular right now, it seems like a good time to talk about this toy. As you could guess this Kong as he appears in the upcoming movie. It's been 48 years since his last adventure in Skull Island and he's grown up quite a bit since then.

In case the 'giant' part of Giant Kong wasn't very clear, this isn't the standard figure. It's a much larger toy. The standard Kong figure has a bit more articulation and accessories, this is a big ass monkey your going to stomp around while yelling. The figure is 11 inches tall and looks really great. His head swivels as does his feet. There's basic shoulder and upper leg articulation. I'm sure he can hold something in his right hand if you put something there. This guy has a lot in common with the last Giant Kong by Playmates, but still just enough to make him different.

I had honestly figured this would be a repaint of the prior Giant Kong toy with some paint differences and maybe a new head. I was wrong, even though the figure has the same basic stature and articulation as the last one. This is a newer, beefier Kong with a big beard. In story he's bigger and older now (he was pretty young in Skull Island, they made a point to say that) so he's got to be more battle hardened looking. He's been whooping all sorts of ass in the past 48 years and now he's ready to kick that suddenly evil Godzilla's ass. *cough*

It's a pretty good Kong toy. I've been a steady fan of these Playmates Godzilla and Kong toys as readers know. They're pretty fun and don't cost very much. It's hard to complain about that. Somebody will, but not me. This Kong costs around $20 and is exclusive to Walmart here in the states (not sure for other countries). This is a good King Kong toy. I can't say enough good about it, so let's watch that trailer again!