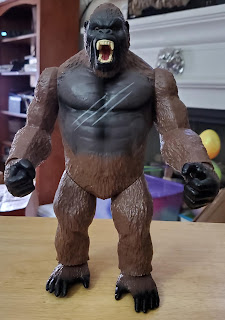 I told you all I'd get the larger Playmates Godzilla and Kong figures, didn't I? Actually they were given to me by way of Easter present from my wife. Kong here, shares a lot of similarities with his standard figure as far as joints go. In this deluxe figure his fists now swivel, but his head doesn't seem to be on a ball joint.

That's not too bad though as the standard figure had more of an in thought expression on his face, while the deluxe is roaring in anger. The swivel on his neck feels more natural, as folks tend to look straight forward when they're pissed off. While I doubt this was on purpose, it sure works out well. I also noticed this figure has a beard, while the prior doesn't. Rumor has it Kong has a beard in the upcoming Kong vs Godzilla movie, so perhaps this is a sneak peak of an upcoming mold. His left had could hold a weapon if you're inclined to stick something in there.

The toy is much bigger as well. I've seen folks say it was around 9", which doesn't seem wrong. I haven't measured him and was guessing he was around a foot. He's displayed with one hand held high in package, so that could gave me that impression. Like the smaller figures he has a hard solid body with solid rubbery appendages. Other monster collectors have informed me they're a hard vinyl. Which sounds right.

It's a pleasant toy in hand. He has a nice heft and stands a little more balanced than the smaller figure. The extra size and weight must have a better center of gravity. While much smaller than the jumbos of Shogun Warriors, I feel a strong similarity of hand feel with these toys. The Godzilla and Rodan my brother and I owned may be long gone, but I can still feel them as if I just put them down a few minutes ago. It's a similar feel and that's a nice thing. Modern jumbos aren't always as big as older ones, but similarity is everything in some cases.