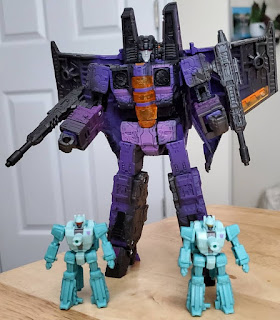 Another of the Christmas gifts from my wife was the ultra cool Hotlink with Heartburn and Heatstroke set. If you find yourself wondering who Hotlink is, he's that random purple Seeker that sometimes shows up in Transformers cartoons.

He's the one with a flame thrower who was next to Sunstorm on the very first episode of the original cartoon. At BotCon 2013 they finally gave him an name. Prior to all this, I'd had always thought Hotlink would make a good name for a Transformer. It just works.

This version of Hotlink uses the Siege Seeker mold, which is super appropriate because it's based on that original cartoon tertrajet. This is a super accurate toy of the guy as he appeared originally. He also appears in the Netflix War for Cybertron series and has popped up from time to time in other TF media. 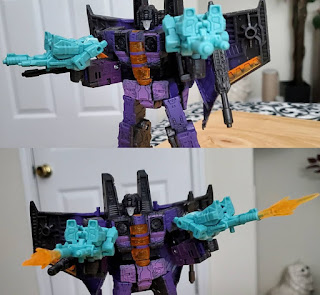 I had only gotten the Starscream version of the Siege Seeker mold prior to this. While I thought it looked cool, hunting down various other Seekers in the past has worn off the novelty of completing the team each and everything. Usually I'm happy to get one or two of them. Not to mention, my Siege Starscream had the chest issue early versions had.

For whatever reason, the chest piece would come off very easy. Which could be super frustrating during transformation or just occasional clumsiness. I was aware they had fixed the problem, but I didn't forget the annoyance.

So getting a 'fixed' version of the mold after the fact was pretty great. In fact with the fix, the Battlemasters, and the paint job. Hotlink almost feels like a completely new toy. 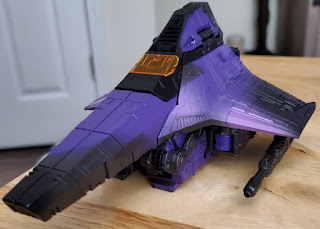 It's not a new toy, it's 3 prior used molds that feel like 3 new toys. It's a wonder what a new paint job can do. Hotlink is joined by Battlemasters Heartburn and Heatstroke. The two are seemingly identical aside from their visors. Their included action effects thingies look a lot like flames.

Hotlink's flamethrower in the original cartoon was light blue like these two. It's easy to see they're supposed to be living incarnations of that. It's a cool little touch that makes me think of older fandom days. I strongly remember a friend on an old message board who had this thing for Headmaster Seekers. They didn't exist, but he would bring up the idea often. A Battlemaster is an updated Targetmaster, so this isn't too far from his idea. I wonder if he likes this toy?