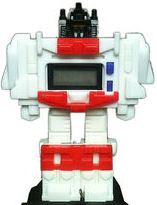 I'm pretty sure you're well aware but, it's Christmas. While out shopping I've been taking notice of all the licensed character watches. They're something fun to stick in a stocking. A cool small gift. As usual, there's plenty of various Transformers ones next to the Baby Yoda ones.

It's funny how these days you just take them for granted. Some are little toys, or just have a symbol, but you know they'll be there. Back in the day this particular set was a pretty hot commodity. Released in Japan around Scramble City/2010 time and later in G2 here in the US.

There was plenty of Transformers fans trying to complete a set back then. They're pretty cool, it's easy to see why someone would want to collect them all. I wonder if in a few years will fans who are kids now would be trying to do the same with those watches we take for granted. I kinda hope so.