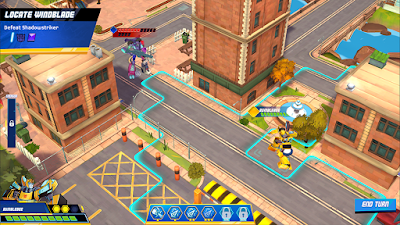 Transformers Battlegrounds for Switch was one of many Christmas gifts from my wife. I've been wanting to play it quite a bit and it was great to finally do so. The game is set in the Cyberverse cartoon/toy line which you all know I've enjoyed quite a lot. Surprisingly the game is a light RTS (real time strategy) style game instead of the shooter or platformer you'd expect.

I generally don't care for RTS games much (because they're boring), but when it's light I don't mind. When I say light, I mean as in I'm not managing a million things. Basic movement and attacking, similar to a board game. The game is pretty story oriented with each level having you help guide a team of Autobots fight Decepticons in various adventures.

I say 'you' as you are playing yourself. The games viewpoint is yours as you just happen to be nearby when things go down and Teletran X scoops you up to safety while having a birds eye view of everything. While you're up there you might as well help tell the Autobots what to do right? The team even refers to you occasionally as 'human', guess they didn't catch your name. I just said you a billion times. 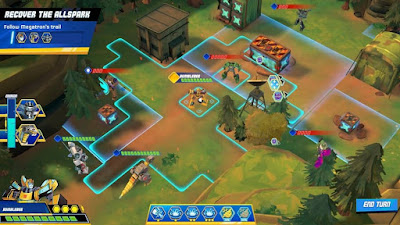 As with most RTS games (light or boring) the action is turn based. Fortunately the turns don't take forever and it goes pretty quick, because that's another thing I generally don't like about RTS games. Nothing says fun like waiting forever for the chance to play my game.

There is a lot of story and you'll find yourself watching a lot of cinemas. They're pretty much the in game characters zoomed in talking about what's currently going on or about to happen. It really captures the vibe of the show pretty well and feels like another season. I could also say if feels like playing out a big adventure with my toys. I like it.