GI JOE Will Send Death On A Ski 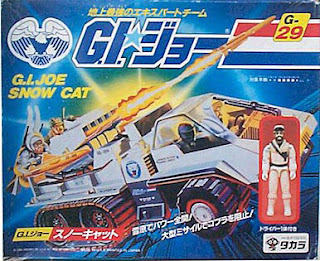 Few vehicles can match the GI JOE Snow Cat in pure badassery. Essentially a half track truck, the Snow Cat is mostly used in snowy conditions as it's name would imply.

Make no mistake about it, the Snow Cat is being deployed to kill somebody in winter weather. It's a military vehicle so that's pretty much the assumption. With a missile launcher in the back and plenty of places a JOE could stand and shoot at some Cobra soldiers. The Snow Cat is perfect for some cold weather killing.

In order to kill you in the snow are ski based missiles. As in, in case the missile launcher wasn't enough, it has missiles on skis. Just rocket propelled missiles on skis flying across the snow. Right across some fresh powder and up some Cobra ass.