Armor Up Of The Bumblebee 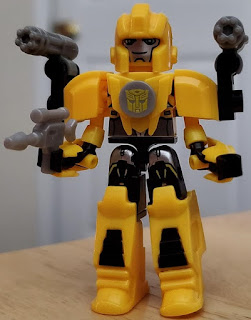 Continuing on our Custom Kreons found at the Dollar General adventures on what's apparently a Bumblebee heavy week... man that was a long sentence. Here's Armor Up Bumblebee! Bumblebee is a bit of a standout from the other figures in this selection. Instead of having ornate armor, BB has two big chain guns just hanging off his shoulders. I mean, why not?

I didn't go into these expecting everyone's favorite little yellow guy to be carrying the heavy weapons, but I ain't complaining. It looks great. Just for good measure they gave him a standard laser gun. Just to make sure he REALLY kills somebody.

In all honesty, as good as he looks, he doesn't make me think of Bumblebee at all. The Kreon makes me think of a Saram from new Microman. Those are from the Microchange era of Microman, which ironically is where the original toy mold for Bumblebee comes from.

These resemblances can't just be a coincidence. 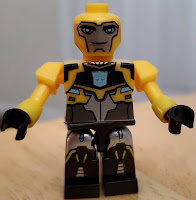