R.E.D Soundwave Can Push His Own Eject Button 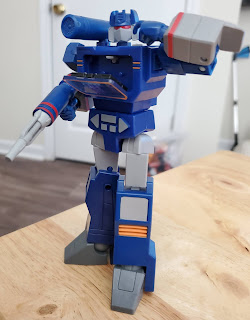 After waiting for quite some time, Transformers R.E.D (Robot Enhanced Design) figures finally started showing up at my local Walmart stores. The wife picked me up the Soundwave on a recent stop for a few things and it's nice to finally have one of these guys in hand. I've mentioned a few times in prior posts about my looking forward to them, so I won't go much into that intentionally in this post. When she handed me the box I had gotten so used to them not being at the store that actually having one I was truly surprised.

For the last time, these toys do not Transform. I don't want that to be the focus whenever I talk about these. That's not the point. These are show accurate versions of the characters that have the features nicer action figures intended for adult collectors generally have. I get it. The lines name is Transformers. I know. It is what it is and these are what the are. 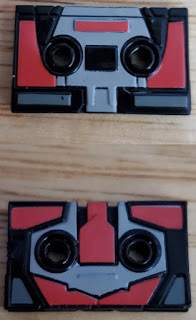 Out of the box, Soundwave is a solid feeling figure with quite a bit of articulation. You can put him in a variety of poses, no shit. Included in the box is his signature shoulder cannon and laser gun as well as alternate hands and Laserbeak in cassette form. Soundwave has four different hands. Two fists and two that allow for holding his laser gun and pointing to mimic the famous pushing eject pose.

The hands can be swapped out with a simple peg system that locks the hand into place. I did have a little trouble keeping his shoulder cannon in place. Not sure if that's a plastic issue or maybe mine was a little tighter fit. Hell, it could have been just me. Same with getting that gun in his hands, that took a little more work than I thought it would. Either the plastic was to rigid or my fingers were too big. I can't do anything right. Shut up.

I'm totally serious, it fucking does! 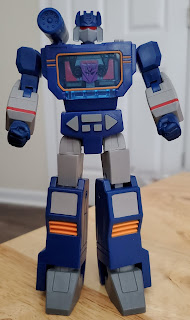 Since it does that we might as well have a tape for commanding to eject. In this case we get Laserbeak, who's usually the first for Soundwave to deploy. It could have just been a little plastic cassette tape painted in his colors, but instead they sculpted the underside of the tape so his birdy robot parts can be seen. They literally didn't have to do that, but it adds a little more niceness to the toy. Laserbeak can be stored inside Soundwave's chest and ejected. Hell yeah.

I doubt these new R.E.D figures will take SCF's place in my heart. They're on the way to being a proper replacement for a line that's been over for a pretty long time though. So far from what I've seen and with Soundwave here in hand the sculpting is pretty similar. It feels like a natural evolution of that Mega SCF I keep comparing these too.

Maybe unfairly as I've taken other similar ideas separately as their own thing and not compared them to something I've held in high regards as a fan. The mind works as it's going to work I suppose. It's that SCF mindset though that's been kicking in since the introduction of these guys and the one I can't shake. I don't think I want to either. Even though I'm not hunting down blind boxes and ordering figures from Hobby link Japan... it's a similar kind of fun with the figure. I know that probably doesn't make sense to anybody but me, but this is a blog and a not a review. Y'all just reading my thoughts and the occasional bad joke. It's hardly an expose. You think Laserbeak shits in Soundwave's chest?

I like my R.E.D Soundwave toy. It would be pretty cool to have a shelf of these guys representing the classic cast. I generally don't do the big displays, I kinda just stick them on a shelf where they fit. With these guys though... I'm kinda tempted. I don't know if it'll fade later, but right now my enthusiasm is pretty high for the R.E.D line. Soundwave is a pretty good representation of how he appeared in the classic cartoon and a nice figure in general. Which is what I wanted, so yay me.