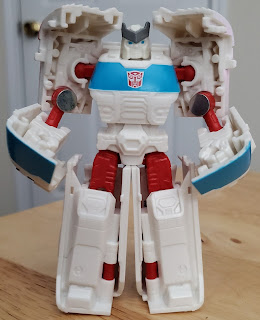 While running a few errands this weekend I stopped by Walgreen's hoping to find the exclusive Bluestreak. While they still didn't have him, I didn't walk out empty handed either. Walgreen's had begun their Christmas set up and as usual the Authentics Bravo figures were with the extra stock. I quick look through them and I found the newer Ratchet figure.

I'd been looking for this guy for a little while now, so it was good to finally find him. That's the thing with these discount store figures, they're made for stores that don't heavily restock their toy sections throughout the year. Unless you hit up a random Walgreen's or Five Below, the discount stores might not get any for a while.

Ratchet is a Bravo class in the Authentics discount line. That means he's the smaller 3" toy as opposed to the 7" Alpha class. These run around 5-6 dollars. I got Ratchet for $6.50, which is pretty fair for a toy bought at a drug store. I almost didn't recognize him at first. I'd gotten so used to never seeing him that upon seeing him... I just stared at it for a minute.

At this point I shouldn't need to point out that these little discount toys are not going to be the caliber of a Cyberverse or Generations toy. If they were a little smaller in Legion size, maybe. But they were making a larger toy toy and with a lower price so there's going to be some concessions. Ratchet is a budget toy through and through. He's pretty basic.I know what I was buying and like oddball things like this. These are a quirky side item to the normal Transformers toys I buy. A fun and weird diversion. Ratchet is hollow, flimsy, and a little funky looking and that's ok. I know a 35 cent cup of noodles isn't the same as a hibachi restaurant.

Honestly Ratchet isn't terrible looking. Maybe a little sharper head sculpt and a little more mass in those arms and he'd be a much nicer looking toy. With these proportions he reminds me a little of Armada Hot Shot. As is, he's fine. His head is made from a different material than the rest of the toy. Several of the Ratchets in the little shelf box at Walgreen's had yellowed already. I picked out one that was in better shape and I suggest you do the same. I don't know if it's a lighting thing or just discolored cheap plastic. It was pretty weird though. 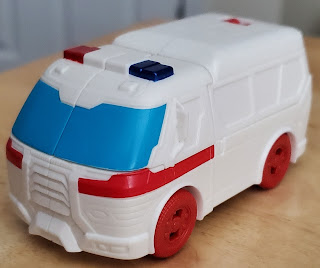 Ratchet folds naturally into his ambulance mode. It's a nice little ambulance that's naturally bare on details as paint tends to cost a little higher than a shoe string budget. What painted details he has though looks pretty good. Noticeably lighter in this mode, but still rolls fairly well. Or he did on the TV table I took this picture on. I had just eaten some leftover pizza. It was pretty good.

As far as these little discount Transformers go, Ratchet isn't too bad. It wasn't that long ago that a Transformer from a discount store was a bootleg that often broke in your hands upon opening it. An official toy for the same price is a good trade off. The line itself is a fun little side quest and a fun occasional diversion. Just neat enough for the price and simple to fiddle with while watching TV after eating leftover pizza. Which I did.