You Can't Walk All Over Doublecrosser 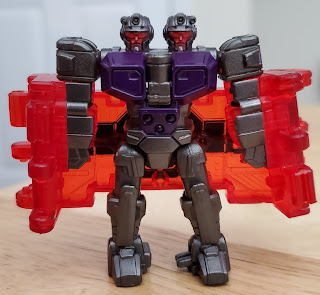 While out doing some Christmas shopping, the wife picked me up Doublecrosser from Earthrise at Target. Doublecrosser is a Battle Master and seemingly the last new mold Battle Master (as of now anyway). It was pretty surprising that she found him as the only Battle Master I've seen has been Soundbarrier after finding exactly one Slitherfang.

The quest for Shawn's tiny snake Transformer continues. I know he already has one, but I'm still getting him one. I was about to say my word is my bond, but I hated that line. Good movie though... where was I?

Doublecrosser is a double headed robot like Doubleheader, but since he's a Decepticon... get it? I really appreciate the variety and the symmetry on the helmets is a nice touch. He looks great. Or they look great. Whatever. 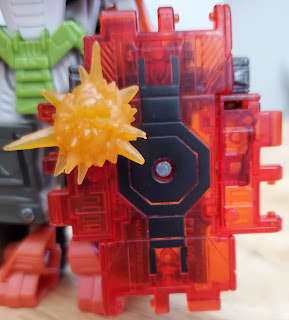 I love the way Doublecrosser looks in robot mode. The purple against the gunmetal with that red face has that classic late G1 Decepticon look. Add in the red kibble and it almost looks like a red cape. He almost looks like a Pretender inner robot, so I'm hoping for a Doubleheader repaint that will likely never happen.

Like other Earthrise Battle Masters, Doublecrosser turns into a shield and a dock plate/connector piece for Micromaster bases. It's done pretty basically by arranging his robot parts under the shield/plate parts which swivel in place.

Thanks to the color and shape, he almost looks energy generated in in these modes. That's pretty neat. He comes with that gun shot thingy that the others came with and can connect in both modes. This shows him being shot at. Probably because all that double crossing.

That'll get you shot. 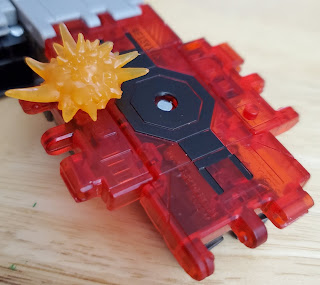 Fictionally, Doublecrosser's a Decepticon... and that's about it. On the Hasbro end anyway. He could pop up in later fiction maybe. On the Takara side of things though, like other Battle Masters he's a Selector in the Generations web comics. These take place in Japanese cartoon continuity.

Selectors are a race/faction of Transformers created on Earth who serve menial tasks who ultimately rebel against their human creators. As a Selector, a Doublecrosser units were used as walls and ceilings. Which is absolutely ridiculous. Do you really need a robot to turn into a wall?

No wonder they rebelled.