Anticipation of my trip to Universal Studios next December is murder. Know what else will murder you? Dinosaurs. One of the things I'm looking forward to is spending some time in Jurassic Park. By the time we go, the new ride will be open and there's gonna be some cool new stuff to check out.

Last time we were there, while eating lunch at one of the JP restaurants, this kid randomly yelled "WWE SUPERSTARS!" and slammed down his soda. There we were, an entire theme park restaurant staring at this kid like a freak. 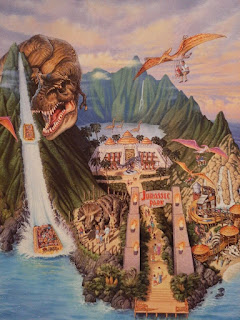 The main focus of the area is the Discovery Center and River Adventure. They manage to recreate the look and feel of the original movie really well. The River Adventure is the second version of the Jurassic Park ride that originally opened at the Hollywood Park in 1996.

The ride was in works before the movie believe it or not. If you look at the images behind John Hammond during the dinner meeting scene in the original movie, you'll see conceptual art from the ride. It's in the 'future attractions' slide. Pretty cool huh? The version in Florida opened in 1999 and is clearly version 2.0 as there's a few differences.

There's another version in Japan, which is a little different as well. The Singapore ride follows a similar idea, but is a river rapid style ride instead of a boat ride with a flume drop. Recently they upgraded the Hollywood Park ride into a Jurassic World version with new scenes and upgraded effects. It looks great... but I still think I like the original better. It just has a charm, you know?