That Time Smokescreen Became A Decepticon 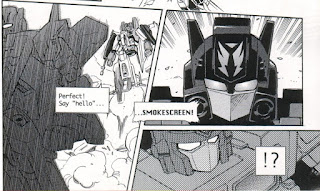 I've said before that I don't care for things if they felt too much like fan fiction. Which is true, however it's not completely a hill I'll die on. There's been some fan works I like a whole lot. Sometimes so much I think of it as legit fact.

Transformers Chronicles by Hirofumi Ichikawa is one of those that I'm going to talk about today. It's a fan comic released around the late 90's/2000 (little fuzzy on a time stamp) firmly during the beast era of Transformers. 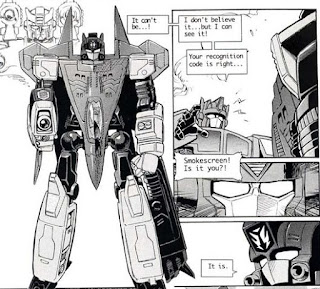 The story pretty much involves the introduction of G2 into a generally cartoon based timeline (there's a little dash of the creation matrix involved). The art is very toy based and it looks fantastic. There's a few different things going on in the book, but one thing in particular that I feel like talking about right now.

Earlier this weekend there was the revelation that the Earthrise Bluestreak toy is exclusive to Walgreen's. So today while I was heading out with the intention to run some errands, stopping by Walgreen's to hopefully find him was on my to do list. Unfortunately I had some car trouble and I'll just have to do that stuff later, including looking for the toy.

Stopping for some lunch after dropping my car off at the shop it occurred to me. It was Bluestreak at Walgreen's, not Smokescreen. I got the two mixed up. It happens sometimes. Which is what brings me to talking about Smokscreen today. Because I was thinking about him. Deep content here folks. 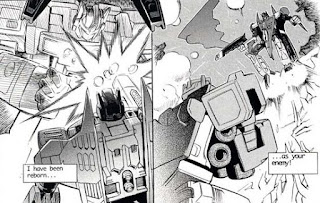 Early in the book, Smokescreen is among some Autobot's who fight Decepticon Sky Scorchers and Predators led by Skyquake. Smokescreen is seemingly taken out in the fight only to reappear later as the Smokscreen from the G2 Dreadwing set. The Decepticons rebuilt him as a new bad guy and he's pretty ok with it.

The books not official story telling, but I occasionally forget that fact. I just love it so much. The art is really great and the story is pretty cool too. Hirofumi went on the do official work on Transformers not long after this. If you've enjoyed the e-Hobby exclusive bios or the Binaltech fiction, then you've seen some of the great stuff he's done for Transformers. I wish he had something to do with the Walgreen's Bluestreak that I got confused for Smokescreen earlier. That would have gave me something to end this with.