Something Stinks On Eternia 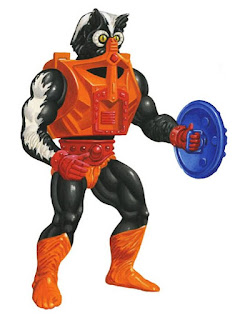 Super strength, lasers beams from eyes, and flying are probably what comes to mind when somebody about super powers. What if I told you there is a villain who's power is smelling horribly?

Stinkor is a member of the Evil Warriors who's basically a giant skunk. His secret power? The funk. If you had his toy, you know he stank. That skunk stunk.

I always thought he smelled kinda good, which was because the odor was achieved by infusing patchouli oil into the plastic. You know that stuff people buy scented with to make their house smell good? According to toy lore, the first batches contained the right amount to make him outright stink while later waves it was lessened after complaints from parents. I got mine a little later, so if that's true, it makes sense.

Fictionally the bad smell is an attack that renders paralyzed. Which is a pretty good idea all things considered. I mean, you've got a guy whose a walking bio weapon. It only makes sense that he himself would stink. Initially he was just one of Skeletor's minions who was a smelly skunk person. Later he's been portrayed as developing the power after a chemical accident.

One of the reasons I've not been as fond of newer MOTU incarnations is the updated fiction feels a little too much like fan fiction. This newer back story is ok though, not too shabby. I do like the original mini comics introduction better as he's just some guy who stinks. The simplicity of the original MOTU is something special. Here's Stinkor. He just is. 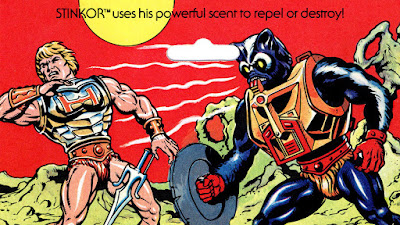 The toy is recycled from other molds. Merman's body, Mekaneck's armor, and one of the shield's that came with Castle Grayskull. It's crazy how some different colors and some stinky plastic can go a long way.

His Heroic Warriors counterpart was Mossman, a green flocked Beastman mold with a pine scent. I guess evil stinks while good doesn't.

Stinkor to this day is one of my favorites from Masters of the Universe. Aside from the odor gimmick, I genuinely like the way he looks. The skunk with orange armor is sharp. He may be remembered for stinking, but his toy sure didn't. Well, it did... but you know what I mean.