My Energon Goes To Work, I Hear Thunderhowl 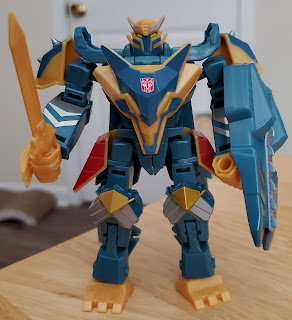 I wasn't concerned with getting the deluxe Cyberverse figures. I get warrior class and Turbochangers then call it a day. Focusing my fancier Transformers buying on Earthrise, Siege, and the sort. Then they went and made a deluxe Thunderhowl and I couldn't say no. New characters are rare these days .

Thunderhowl is a Knight of the Primes, giving him a very neat armored look. His design is a mixture of knight armor, his wolf alt mode, and some good Euro G1 style flourish. He looks awesome.

Being a knight, Thunderhowl has a sword and shield. The sword has a wolfs head in the hilt for a little extra style. Speaking of style, they really added some to the robot mode with various flourishes. He's got a cape and other adornments that really sell the knight theme. Not just a new character, he has a fresh look as well. It's really appreciated. Like really. 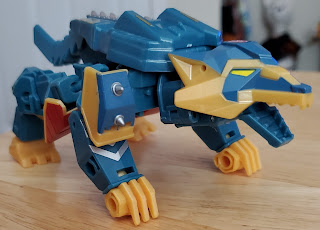 Transformation to wolf mode is a lot more involved than I thought it would be. Instead of the generic lay down transformation, there's a bit of folding and rearranging the body. That cape in robot mode becomes a tail and his shield is the wolfs back. The arms and legs become wolf legs as you could guess, but the way it gets there wasn't the way I thought I'd go. Sometimes it's nice to be wrong.

As a wolf, Thunderhowl is angular and robotic. His mouth opens and you can arrange him into a few different wolf poses. As far as articulation goes there's a decent amount. More as a robot than a wolf. You can't roll him up into a ball, but maybe a wad.

Thunderhowl has a few extra parts included in the box. A neato energy effect and Maccadam's head. Because he cut it off. Or if you've been collecting all the Cyberverse deluxe figures, it goes into the build-a-figure Maccadam. I haven't been, so he just has a severed head. Don't fuck with Thunderhowl. The energy effect can be either placed on the sword or on a connector in the wolf's mouth. This gives a fire breathing attack or a cool energy attack. 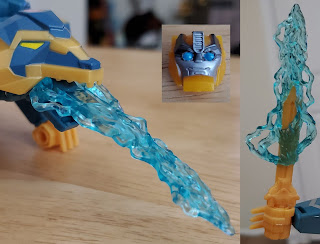 The  effect came bent on mine, so it kinda looks like the wolf is puking. Which as a pet owner I can promise will happen. All over the damn couch. It does make for a cool energy sword, which frankly a Transformer would need. All the other dudes have guns and he's waiting for them to get close enough to whack with that thing. Needs to be a powerful whack to make it count.

Tunderhowl is a... did you see that, I made a typo. Thunderhowl is a good toy. It's nice to see a new character that's also creative. I like his dark blue and gold colors too. Nice and sharp. I hope more like him are on the way. Not that I don't like what they've been doing, just this knight wolf robot is a breathe of fresh air.