Good old Jetfire. One of the more popular Cyberjets and for a while there, one of the more often used molds. Chances are you've probably got a version or two of it and let's transform it? As you can see above your figure should have two missiles. These fire from the launcher on the top of the jet which is also the robots right hand. It only fires one at a time, so the spare is often held in the other hand as a club. 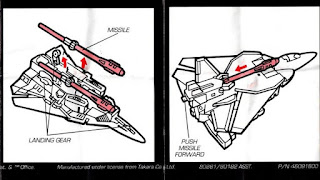 In jet mode, the spare missile can be stored underneath the jet. With both missiles in place he looks pretty heavily armed. The jet itself is pretty neat. It's small, but not tiny. The wings can open up as well.

To fire the missile, just push on the end and it pops out flying a few inches. Instead of a spring trigger, the launcher has a sort of marble mechanism. The launcher clamps around the ball shape on the missile. The pushing plays with the friction of the holder and it just pops out. This works really well and is very handy as you won't loose missiles by accidental firings.

Let's start transforming him now. simply unfold the jet's undercarriage out. It's pretty obvious that these are Jetfire's legs. Thanks to the sculpting they blend in pretty well. There's also some fold-able landing gear built into them which stores out of the way in robot mode. 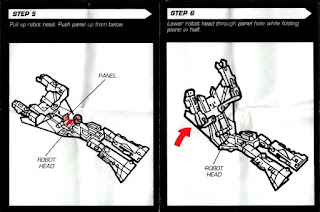 After you flip out those legs, adjust those arms into place. The missile launcher is one and by now you've noticed the other was the storage for the spare missile. Spread them out like in the picture. Just like the picture, don't get creative.

By now you can probably see the robot's head, that's generally where you need to start folding. So do that. Fold it. Now. As you do this everything will fit into place with a little adjusting. Maybe a lot if you got creative with those arms like I told you not to.

You've mostly got Jetfire transformed. Just fold those arms up into place and you've got a pretty good looking robot. Place one of those missiles in the launcher so Jetfire can shoot it at somebody. The other can be held like a club or stored on the underside of his arm. It's the same place you had it stored in jet mode and looks like an arm mounted gun when done so here.

Like I said before, this mold got a lot of use and chances are you've probably got a version or two of it. There's five different versions of it out officially and I still see bootlegs of it occasionally.

It was used twice in G2 as Hooligan and Jetfire. In Robot Masters as R-Blade and Wind Sheer in Universe (v1). The last use was in the BotCon 2005 exclusive set as Ricochet. Each version is pretty different from the other and are pretty sharp looking toys. Go get one if you don't already own a version. Then fly him around your living room. Make "pew pew" noises.