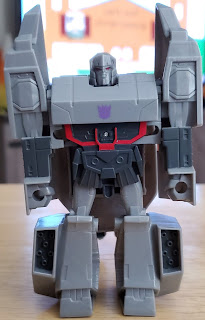 Turbo Changers, I love them. Old school robot toys sold to smaller children under the guise of 'simple'. For not a whole lot of money you can usually get a pretty great little toy that's fun to fidget with. Robot mode, tank mode. Tank mode, robot mode.

When I saw this newer Turbo Changer Megatron toy, well I first passed. I was holding out for the black version soon to show up. Then I decided to go ahead and grab this one just case I never see the black one. If I do, then I'll just have both. That was a filler paragraph. If you like what I do, please consider ... just kidding.

This version of Megatron turns into a Cybertronian tank as it's intended to represent him back home on Cybertron. It's kinda a typical spacey hover tank looking design. Not too bad, does kind of remind me of a door jam. A door jam with guns, gently remove it from under the door. Don't just kick it. It's got guns. 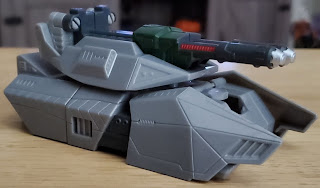 Turbo Changer is the newer more cool sounding name for One Step Changers. Named so because they transform in one step (give or take a few adjustments), Megaton here does just that. Simply spread his legs (don't be weird) and he unpacks into a squat, but traditional looking Megatron.

All jokes about door stops aside, it's a pretty sharp looking tank. If I had some Diaclone drivers, I'd be tempted to see if one could pilot it. 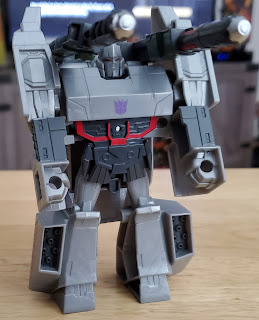 The action gimmick of this particular toy is the Fusion Mega Shot. Which means positioning the tanks cannon over his shoulders. I know, insane right?  It's not really bad, but seems like another name would have fit better. There's a very basic amount of articulation here, as should be expected. His arms move, that's it. These are simple toys and really it's a pleasant simple. I haven't tried it, but I'm tempted to give him a weapon. He could hold one.

My only complaint might be limited to my figure, others may have better luck. His left leg tended to sag in robot mode not really locking into place. I found myself positioning the cannons to hold him up when taking that picture above. I'm not sure if it's a wide spread issue. Maybe.

If you don't like One Step/Turbo Changers, then you're not going to like this one. If you do, you might. It's not the best one I've had... but not the worst either. Maybe if I ever find that black one, it'll have better legs. That would improve it a lot. He looks good, it's a neat toy. A simple Megatron that looks like Megatron for not a lot of money. Not bad.