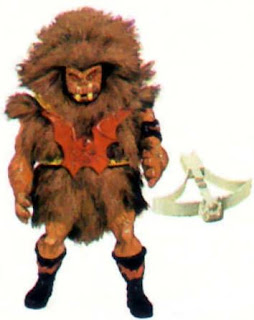 On Eternia, He-Man and The Heroic Warriors face a living horror show on a regular basis. You've got Skeletor and The Evil Warriors. King Hiss and the Snake Men. Then there's Hordak and The Evil Horde taking Skeletor's gimmick and turning it up to 11. Instead of a skeleton faced wizard, you've got a skull faced demon. Instead of Beastman, you've got Grizzlor. Beastman is basically a jungle wild man who can control animals. Grizzlor is a freaking murderous urban legend that works for Hordak.

In his introductory mini-comic, Grizzlor is the scary story told around the camp fire by The Heroic Warriors, Eternia's version of Cropsey if you will. Like all urban legends, Grizzlor is based on something real. Unfortunately the real thing he's based on is actually the same thing told on Eternian creepypasta and has started working for Hordak. His one weakness is his own reflection. Which scares him away.

Other depictions of Grizzlor tone that down a bit. In UK comics he got a different background, being a raging beast among his normally peaceful people before being noticed by Horde Prime. In cartoons, he's more or less a monster henchman. Grizzlor was to be in the early 2000's cartoon, but it got canceled with The Evil Horde making a brief appearance in a flashback. He's in the Netflix She-Ra cartoon, but honestly I haven't watched it. I'm pretty G1 about MOTU.

I made the comparison between Hordak and Skeletor up above. Somebody behind the scenes clearly got the two mixed up also as Beastman in the Master of the Universe movie is seemingly based on the cartoon version of Grizzlor. Grizzlor's gotten some toys over the years. His original featured a ton of fur that often got pretty gross overtime from kids and their inherit grossness. Like most Evil Horde members, he comes with the skull crossbow.

There's some releases in the Classics line, one's a homage the original figure and another his cartoon appearance. There's a ReAction figure and a Pop. There could be others that I'm unaware of, but the most famous of them all is the black variant of the original figure. In which so many were produced with a black face instead of a brown one. It's pretty gnarly looking, almost makes me wish that was the normal one.