Tonight On Kate And Allicon 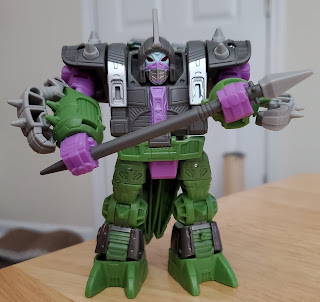 Sharkticon this, Sharkticon that. Where it's really at in on Quintessa is the ranks of the Allicons. An Allicon generally works guard duty for the Judges and other higher ranking Quintessons. They're squat little bots that turn into weird mutant alligator things. Quintessa is a weird place.

The War for Cybertron trilogy continues to deliver exactly the Transformers product I want. This new toy of the Allicon is part of the Earthrise line and might I say they did one awesome job.

In robot mode, it's a short and squat fellow with some spikey armor and trademark spear. Looking directly out of the 1986 movie and pretty well articulated to boot. I really like this toy.

It's not an unfair comparison to call the alt mode a robot Street Shark despite these little monsters coming first. That's where your mind will likely go to when you see that characterful sculpt. One again in alligator freak mode, the toy looks like it just hoped off my TV screen. That is awesome.

Transformation is pretty easy, but just involved enough to get everything in place. This is how most Earthrise Transformers have been and I've been thankful for that. Looks like they hired some designers who were able to get a toy from faithful mode A to faithful mode B without accidentally calling forth Pinhead. Little swivel of the waist, locking parts into place, and you've got the weird robot alien alligator mode the guards turn into.

Quentessons are so wonderfully weird that their far out designs contrast nicely against things like a realistic truck. Groovy weirdos from space man. Dig it.

The tip of the space gator's tail is also an additional sword as well as the spear can store on the space gator's back. The sword blends in seamless with the tail but the spear is kinda just mounted. That's probably a strike against the toy for some, but I thought it looked like he was wearing it on his back. The spear can be mounted in either mode or held by both arms. For those moments he'd need to poke somebody.

I wish I could find something negative to say about this toy. I'm lying, I'm glad I have nothing bad to say about this toy. It's perfectly perfect and I love it. Hasbro and Takara Tomy really nailed it this time. I'm tempted to get a few extra to troop build. The Earthrise Allicon is a great little figure that looks like the character just walked off the screen during a viewing of Five Faces of Darkness. That ain't bad y'all, that ain't bad.