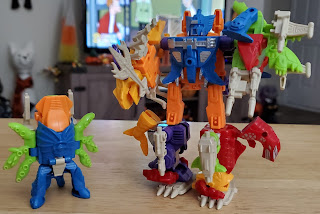 This morning I found some time to play with my new rainbow colored Seacon set and man, what a time I had. Like I said yesterday, it's a downsized set. Meaning, it's much smaller than the original toys.

Whenever these knock off toy companies make a Transformers set, they tend to get creative. There's molded over parts, sometimes new parts made to compensate for deteriorating molds. Or in these downsized sets, they seemingly have to re-engineer some of the parts a little.

The Seacons were a Scramble City style combiner team, meaning any of the limbs would work as any limb. That wasn't the case here, or from what I could tell after a lot of fiddling. Not to mention, the neat 6th member could be a gun wasn't universal either. Which didn't matter as Piranacon doesn't have fists to hold it with. I opted to keep Tentakil out of the combiner since I just love his weird sea monster mode so much. Thanks to ample peg holes and guns, you can fashion a blaster type hand easily. Honestly in combined mode, I really like this toy. The wacky colors look sharp and the sculpt looks really good in a smaller size.

Going back to the individual team members, the sea monster modes look really great. Snaptrap is as small as the limb bots, which is funny as the smaller size makes for good proportions when combined. They're really good copies of the original toys as well.

In robot mode, some of that knockoff toy new part magic comes in. Leg/mid-sections are serviceable, but are clearly where the company has had to get a little creative. It's still a really nice looking set. While a few parts were omitted and not all the accessories are there, they've all got weapons. Aside from scale and color, they're pretty close approximations of the team.

The quality is always in question with knock off toys. Sometimes it's a near perfect replica, sometimes it's kinda ok. Sometimes it's apparently made from old soap and turns into powder instantly. For the most part these guys were pretty good. Some of the joints are really loose, while one of Snaptrap's legs was impossible to move. I'm no stranger to knock off toys and some of my old tricks came into making a more stable set. 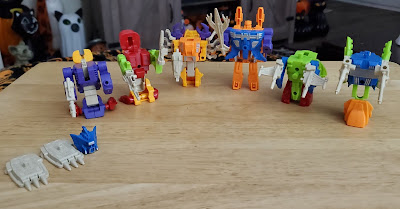 I absolutely love the Piranacon this set makes. That smaller Snaptrap makes for a different looking torso and the proportions are absolutely wonderful. Normally with Scramble City style combiners, you have a big body with stumpy limbs. Everything is more evened out here and it makes for a better looking robot. I can't help to look at other combiners and imagine them with similar builds.

It was a total surprise when Shawn sent me this and made for an interesting week. I'm pretty grateful for it. I've got a ton of toys, but the ones with stories I really appreciate. Shawn's an awesome friend as is, but dude gets me. He saw some weird shit and knew I would not only like it, but would turn into a week of site content.