Patrol Of The Race Car 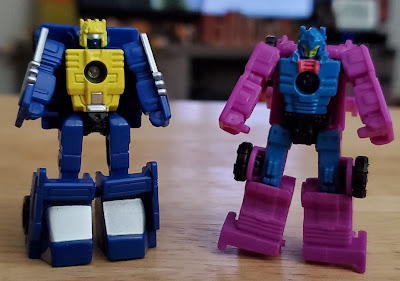 The Earthrise Race Car Patrol is an update of Roller Force (purple guy) and Ground Hog (blue guy) who were members of the Race Track Patrol in G1. Things change, names change, sometimes colors change. Ground Hog was purple in G1 for instance. They also change into robots, it's the gimmick of the toy line. I'm ok when things change.

I got these dudes last week and was pretty happy to do so. I'm gobbling up all the Micromasters and Battlemasters I can until the seeming end of tiny robots in mainline TF for the time being. Assuming the individual Titanmasters don't get re-released in that upcoming Headmasters thing. If that happens, then game on. Either way, I'm enjoying them while I got them. Surely there will be new tiny robots in TF sooner or later. Humor me.

These two turn into, you'd never guess, race cars. Weirdest thing right? The two can combine to form what's supposed to be a gun, like other newer Micromasters. I didn't take a picture of that. Sorry. I kinda forget they can do this as it just looks like two robots stuck together. Like the designers were told by higher ups to do something like that and they did whatever they did out of spite. "Fine, here's a fucking gun."

The two are pretty faithful recreations of the original toys (aside from colors) with improved articulation. I really can't find anything bad to say about these toys. If this was an email, I'd end it with a bunch of hearts. Like this. <3 <3 <3 <3