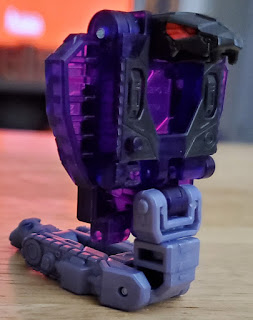 One of the neat things about the smaller 'master' figures in recent Generations lines is their revisiting older Transformers ideas. Slitherfang his an unused concept for the Autobot Master Warriors from Headmasters. Like Titanmaster Sawback and Ramhorn, Slitherfang here found himself reborn.

The Titanmasters were based on released toys though. This is Slitherfang's first time being an official Transformer toy after being conceived over 30 years ago. Better late than never huh?

Despite being originally designed as a Headmaster, Slitherfang now is a Battle Master. As an Earthrise Battle Master he can turn into a shield or a connector piece/dock plate for Micromaster bases.  His robot mode as you can tell is a snake. There's bound to be some generic 'beast crap' complaints about this, but animals was a somewhat regular design choice for bot mode back in G1. 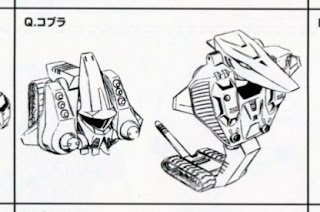 I always liked it for the variety and thought it went well with the monster themed Decepticons post movie. Add in the purples and teals of that time and you've got some sharp looking robots.

Slitherfang is mostly translucent purple with a gray tail. There's some black and red detail paint in there that really makes the simple colors look great. Small touches can make a big difference.

Speaking of little touches, the tank treads on his tail. I love those little old school robot toy details. He almost looks like a little Starriors toy and that's a good thing. Tomy and Takara merged in 2005. Even if coincidental, it seems intended. Did that make sense? 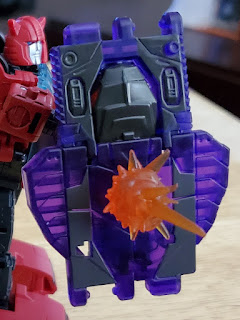 His shield mode looks pretty good thanks to the cobra's hood carrying over to it's general shape. Included is one of those little blast mark things that has one place to be plugged on. If you're display minded, that's exactly where somebody should be aiming at.

There's not much fictionally for Slitherfang as of this writing. I'm assuming he'll get worked into Takara's ongoing web manga at some point. I'd like to think it would be more related to Headmasters, but you never know. He'd make a good Selector too.

In Earthrise he's aligned with the Quintessons, which is a pretty good fit. I could see him slithering up during an attack and being used by one of the bailiffs to guard a judge when all hell eventually breaks loose.

What if he was a Selector that aligned himself with the Quintessons?

That'd be a neat parallel. 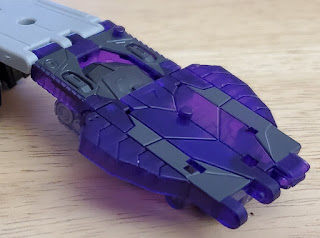 There's not much to say about the connector/dock plate mode. It's a ramp or connector for Micromaster bases. You can plug that blasty thing into this though for dramatic dock plate action.

In all, Slitherfang is a pretty good Battle Master. With these little guys the best part is the bot mode. The shield and dock plate are all pretty similar with small cosmetic differences. But a little purple snake sells itself.