Another Final War For Godzilla 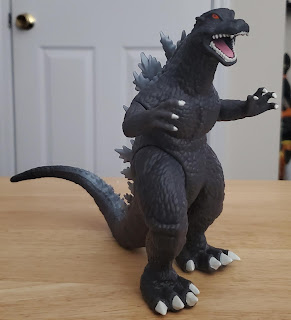 Playmates Godzilla toy line matches the definition of kaiju in that it is a strange beast. You've got a mix of Bandai soft vinyl released through the brand as well as hard vinyl original creations by Playmates. Add in the newer Kong vs Godzilla movie action figure line and you've got a weird mixture of toy types hanging on your Walmart shelves.

I've said before how the hard vinyl figures are visually similar to the soft ones. Aside from varying sculpt quality, you might not notice the difference when they're next to each other. I've chalked it up to a mixture of whatever deal they have with Bandai and Playmates own facilities for the differences in the lines. Admittedly I'm being a nerd about this, but when you collect these things, it tends to be a sticking point.

I've grown quite fond of the Playmates figures regardless and even find the random sculpt issues pretty funny. It's fun to point out something and just say Playmates. It's just their thing. Then they go and release a soft vinyl figure on their own and we're back to square one. However instead of focusing on that for too much longer, I'm just going to relish in the fact that they made a pretty decent one.

A little while ago, I talked about Playmates Shin Godzilla figure. This particular toy was subject to a lot of poo pooing in various kaiju groups. Fair enough, despite growing on me, he definitely isn't for everyone. I don't know what the plan was at Playmates, but they swapped him out in newer shipments with a new Final Wars Godzilla figure. A soft vinyl one to boot! I've seen various discussion on the source of the mold and some have speculated it's a laser scan recreation of a Bandai figure. Maybe. There's a little rounding of the edges.

The only really iffy point is those eyes. I don't mind them as it's different and reminds me of older dinosaur toys. Final Wars may not be everyone's favorite movie, but folks tend to like the movies designs and they find their way to toy form often. Especially with Godzilla, it's a pretty defining look for the gorilla whale. 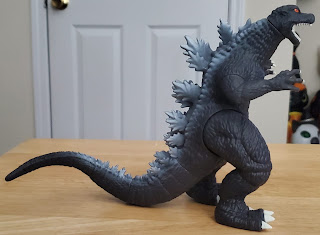 It's a pretty good figure of Godzilla regardless of all that nerd stuff I just said. You've got the standard amount of articulation for a figure like this. Shoulders, legs, neck, with a little bit of tail. Don't be gross.

For me he hit's all the points and like I said, I kinda like the cludgy Playmates vinyl toys. I don't know why either. If you don't like the eyes, I'm sure you could probably fix it with a little paint. I've seen some pretty good fixes on other Playmates toys recently.

I'm keeping mine stock though.