A Squad Intended For Battle 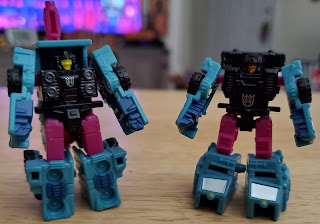 Among the newer Micromasters I found recently was the Earthrise release of the Battle Squad. I wasn't able to get these guys when they were released in Siege, so of course I jumped on them. Then I got the pack I didn't jump on. Whoops.

Now I just hope I can find the Rumble/Ratbat pack at Ross or something. Then I'll successfully gotten all the new Micromasters from Generations. Go me.

Direct-Hit (right) and Power Punch (left) are both members of the G1 Battle Squad faithfully updated in Siege. The Earthrise version is a straight repack of that. So there.

The two combine to form a cannon transport vehicle. I've always liked this type of Micromaster combiner and was pretty happy to see them make a return here. The two are pretty faithful to the G1 versions aside from the black chest on Direct-Hit and that's great. I always really liked the more interesting colors of late G1 and often they're either muted or exaggerated in newer versions of the characters. They got it just right with some extra detailing color. The guys look pretty great.

Newer Micromasters have slightly improved articulation from the originals. You can't really expect a ton from a tiny toy that comes in a two pack for $10. It's just not going to happen. The newer Micromasters are on pare with most Mini-Cons and that's a pretty good amount of movement for a toy this size. The cannon from vehicle mode or Power Punch's back can be held or mounted on compatible Transformers. Really, these newer Micromasters are almost Mini-Cons by another name, which the reverse of that is how many of us saw Mini-Cons during their introduction. I liked those too. 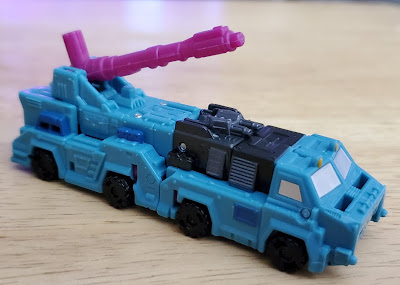