A Weekend Of Happened 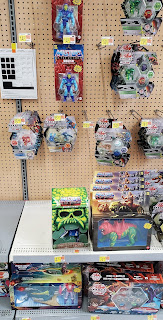 This past weekend was pretty low key, thankfully. I had gotten off Saturday morning and watched Tokushoutsu off and on while napping and waiting for the grocery order to arrive. Shortly after I went out to Target and Walmart to pick up a few other things we needed. High hopes for the new Hasbro MMPR Megazord at Target were dashed as they had a spot for the toys, but none in stock. Dammit. They did have one more of the Cyberverse Tiny Turbo Changers I've been hunting for and Chewbacca from Star Wars Mission Fleet. Those and some Baby Yoda stuff were grabbed for the wife.

Walmart still didn't have anything new on the TF front aside from the mountains of Netflix stuff. I'm getting strong early 2004 vibes from the over ordered waves of toys. Oh well, they'll crowbar the new stuff in when it comes. New Micromasters have been popping up and I never have trouble finding those at Target. Hopefully those will end up in my possession soon. Ghostbusters stock was still wiped out, though the Real Ghostbusters shelf tags are still in place. Hope I can get that Ray and Winston soon. Same amount of GI JOE, soon I'll be grabbing those. Admittedly I'm letting the rush slow down a bit so I can get the ones I want.

Walmart finally put out some Masters of the Universe stuff! Some! While they didn't bother with any WWE MOTU, there was a bunch of Skeletor, Battle Cat, and Sky Sleds. I would have gotten a Skeletor, but they did have a full shelf box of Eternia Minis. Since folks are buying the entire case of at a time, so I decided to go ahead and buy a complete set of series 1 while I had a chance. Next week I'll get regular MOTU if it's in stock.

Right now the stuff is pretty limited for it's run as a Walmart exclusive line, so it'll be easier to get next year when it's everywhere. I'm trying to be patient as I can, but seeing dudes clear out stores in groups is a little piss offy. It might be first come, first serve. But it's also a free market and I have a little problem buying from third party sellers. Karma mofo.

Power-Con was also this weekend and since the pandemic and all, they did a free online version like other cons. This would have been awesome if not that it was done exclusively through Zoom without replays available. Between the time difference from Georgia and California, the panels I was most interested in was on while I was getting some sleep. Without the video put up for later viewing like other cons, I couldn't watch it later like with KaijuCon.Line. Considering it was a free, I'm not complaining. Just wished I could have taken part in it. I did though read the news and am pretty excited for the stuff coming for MOTU.

The rest of the weekend was spent with a little room organizing and watching movies on Netflix. Hopefully I'll have my room somewhere near were I want it within the next few weeks. While I just moved in the middle of June and work on it's taken a backseat to more important things, I'd also like to be done with that project. Admittedly parts of it will always be in flux. Some Halloween planning was also done and man, the kids in our new neighborhood are going to love us.