A Weekend Has Passed, Sadly 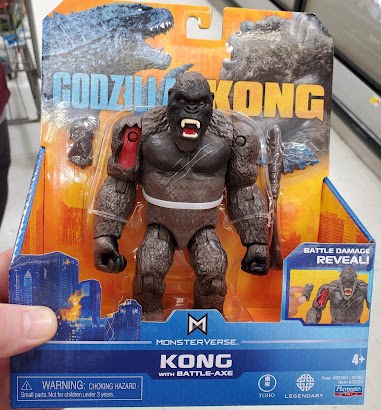 I'd act like I did very much this weekend... but I didn't. I did watch Siege on Netflix Friday (and finished it Monday) and enjoyed it quite a bit. I talk about it more in this months episode of Transform Squadron (which I also recorded Monday), but in short, I liked it. Really looking forward to the Earthrise season, but no clue when that'll be.
Saturday after getting home from work we went to Walmart to look for a few things. Considering we get our groceries delivered, it's just oddball things we go out for. I was hoping to find some new Masters of the Universe stuff, but alas, sadly it wasn't there. I don't know if it hadn't been stocked yet or if it had been cleared out. Considering the pictures in MOTU groups of dudes clearing out entire shelves in one visit, I'll never know.
It's mostly angering when I see the entire box of minis in the carts, that's what I want the most. Ghostbuster are still cleared out still, so I'm hoping a restock will allow me to get that Ray and Winston I need. Same bunch of Netflix Transformers on the pegs, leading me to hope the eventual clearance of Megatron and Sideswipe will be in my favor. We decided to go to the other Walmart 10 minutes away and while there I got Kong from the new Godzilla vs Kong line by Playmates.
Movie isn't due out until May, but they had a full shelf of toys. Not bad either, $10 for a standard figure. These aren't vinyl either, but outright action figures and I honesty like that. They make me think of TMNT figures in construction. They have battle damage similar Jurassic Park toys where a chunk of meat can be torn from the monsters in battle. Kong comes with a caveman style battle axe made from one of Godzilla's tail plates. That's awesome. Sadly neither Walmarts had Star Wars Mission Fleet figures, so I see a Target visit in my future. I do like those a bit.
Afterwards we went to Rack Room Shoes since we had a coupon and there was a sale on top of their normal BOGO deal. Got a sweet pair of new Reebok since they've been on my mind lately. I've noticed Reebok bags and socks at Walmart for back to school and keep wondering if other Reebok products will start showing at the store. A discount line or stuff like basketball shorts. I'd love something like $20 Reebok classics in a million colors.
That was pretty much it. We had Olive Garden take out for dinner and mostly chilled around the house the rest of the weekend. I had plans of doing some work on my room, but not doing anything for once since spring sure was nice. Had plans to grill out Sunday which became ordering pizza from Hungry Howie's as my Mom stopped by for a little bit.
Did some preliminary Halloween planning. We got a notebook to write all of our plans down while watching shopping videos of folks showing what they've found at their stores. I've been eyeing early leaks at upcoming Spirit Halloween stuff, and I love their theme this year. That'll be a post later this week along with that Mission Fleet one I forgot to do last week.
ghostbusters GIJOE Godzilla godzilla vs kong Halloween He-Man Kong Masters of The Universe Netflix reebok sneakers Star Wars Transformers what the heck I did this weekend Zone Base