What I done did this dang weekend 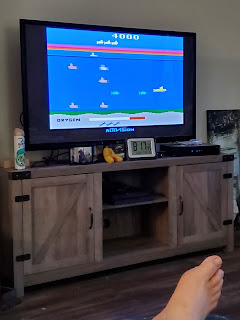 After getting home from work Saturday morning, the wife and I paid At Home a visit to see where they were on Halloween stock after putting away the grocery delivery. They've added a new display and more stock since our last visit and I was glad to see the return of the skeleton octopus. I wanted one last year and never bought it. We grabbed some candles that were very similar to older Halloween candles from both out childhoods. Not the exact same molds, but pretty dang similar. Aparently Tuesday Morning has begun stocking their Halloween wares, so I see a visit to our local one is in order soon.

After that was a trip to Home Depot for a few more yard things and a visit to Walmart for the handful of things we needed outside of our grocery order. I dig the convenience of having groceries delivered, but I like to pick out my own Ready-Pac salads. I grabbed The Real Ghostbusters Egon while there. Eventually I'll get Netflix Sideswipe and Megatron, but considering the hundreds of them there, No rush.

Picked up some Panda Express and headed home. After a nap I assembled our new patio furniture outside on said patio while listening to the crickets and the radio. It was pretty nice outside of the nearly 100 degree weather. Summer in Georgia, it's just as hot at night. Hooray baby powder!

I organized my new room for a few hours and consolidated a few boxes for better storage. While organizing some DVD's and Godzilla toys on a shelf I listed to Unsolved Mysteries. The old one on Pluto, I've still got to watch the new one. Seeing as I finally just started Tiger King... it might be a minute.

Sunday we cooked out and my mom came over. Though it was so hot, I probably didn't need to use any charcoal to cook the food. After mom left I initially planned to work on my room some more, but ended up playing some of my At Home Blasts in the living room while the wife played her Switch. Oddly enough about the Blast consoles, the audio doesn't always work depending on TV model.

Our living room TV, nope. I played some NES Star Wars and a bunch of Atari games. Secret Quest is still a lot better than you think it would be. Seaquest is still super fun. NES Star Wars is a lot harder than I remember, fun, but not a casual game. We ended the weekend watching ghost videos before the sandman entered. Brought dreams or something. Weekends are pretty great, sleep is awesome.

at July 20, 2020
Email ThisBlogThis!Share to TwitterShare to FacebookShare to Pinterest
Labels: at home, atari, Halloween, misadventure, nes, seaquest, Star Wars, the real ghostbusters, Transformers, Walmart, what the heck I did this weekend, Zone Base