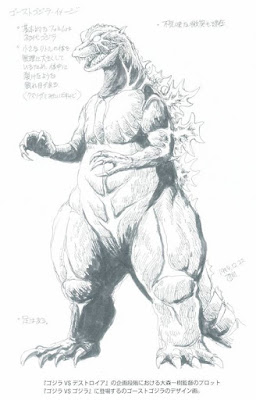 Godzilla is a giant fire breathing monster that will destroy your city. Even if he's the good guy in the scenario, he's going to destroy the city. What I'm saying is, he's a giant threat. That's why they killed him with the Oxygen Destroyer. Thing is, he's not the only Godzilla. Depending on the continuity represented, there's been maybe two or three of the giant monsters.

That's where Ghost Godzilla comes in. For a time, Toho planned on bringing back the original Godzilla as a ghost to fight the then current Godzilla. To end the Heisei series, Toho planned on the two Godzilla monsters to fight it out. One of the ideas for this was to have the ghost of the original Godzilla posses Little Godzilla, and grow into a frightening giant new Godzilla (see the above picture). Ultimately the idea was dropped as the past two movies had alternate versions of Godzilla starring (Mechagodzilla, Space Godzilla). Though I don't think the idea went away. 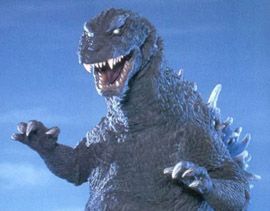 In 2001, Toho released Godzilla, Mothra, and King Ghidorah: Giant Monsters All-Out Attack (GMK). What does this have to do with Ghost Godzilla? Look at the picture above of the GMK Godzilla, which is not your average Godzilla. GMK Godzilla is the result of those who died in the Pacific Theater during World War II taking revenge on Japan for forgetting it's past. In so many ways, he's a giant hell spawn brought into existence by the souls of the dead. Lot's of Ghosts Godzilla. 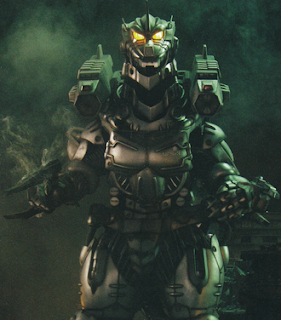 Hey, think that's all the spooky shit Toho did with Godzilla? In 2002 Toho revealed the coolest incarnation of Mechagodzilla- Kiryu! What's so spooky about a robot Godzilla? Remember that whole 'original Godzilla' from 1954 I was talking about? In this movies continuity where that Godzilla died and the current Godzilla terrorized Japan so much that they used the skeleton of the original Godzilla to create Kiryu. A skeleton? You know the almost universal symbol of spookiness? Yes, The original Godzilla's skeleton is inside this thing leading to it being possessed by it's ghost.

So basically Mechagodzilla is Ghost Godzilla finally realized. Which isn't too bad as Kiryu rights his former life's wrongs and becomes a hero. That's the opposite of the original intent of Ghost Godzilla, but still pretty creepy to think inside that is a skeleton in possesion of it. I'd love a ghost story of one of JXSDF inside the mech haunted by Godzilla's ghost. A giant haunted house robot. To add to his inert yurei nature, those red lines running down from his eyes? They light up red and are intended to simulate bloody tears. Damn Toho, that's dark!
at July 15, 2020
Email ThisBlogThis!Share to TwitterShare to FacebookShare to Pinterest
Labels: creepy, ghosts, Godzilla, Japan, japanese, kaiju, kiryu, Mechagodzilla, monsters, scary, Spooky, summer, Toho, Toku, Tokusatsu, yurei, Zone Base