Things are getting hairy around the base, and that's because it's Friday Night Frights time! We're coming around the corner of the end of Spooky Summer and into the Halloween season. Mid August is when the pumpkin spiced mayhem goes into effect and with it, Friday Night Frights will go into hiatus until November. So I figured a good wrap up of the Crestwood House Monsters exploration we've been doing would be with the heavy hitters! Not that I'm out of these classic books, just it's time to spice things up a bit, and given that spice will be of the pumpkin variety... I think you get my point. Spooky shit.

The Wolfman is one the more layered stories from the Universal Monsters gang. Larry is convinced he has become a werewolf and is the one responsible for the recent murders in town. Everyone thinks he's loosing his mind while looking for the source of the killings while the guilt is tearing Larry apart. I'd like to point out the cover of the book though, that's not The Wolfman. That's the Werewolf of London which Universal released six years prior to The Wolfman. Frankly, I've always found it's story to be better than Larry's adventure.

Wilfred is a scientist who travels to Tibet in search of a rare plant. While there, he's attacked by a werewolf. Back in London we see that Wilfred's wife is bored of him being locked away in his lab and not paying attention to her. Wilfred is now a werewolf and is murdering locals at night. Afraid of what he might do, he locks himself away in hopes of keeping his wife safe. His wife, all the while getting increasingly more and more fed up with him ignoring her and locked away in the lab. In case the situation wasn't complex enough, an old flame comes calling.

Several of the Universal Monsters tend to make the viewer feel sympathy for them. In the werewolf movies that theme is really driven home. They're sad movies under all that fur and fangs. The book is in it's entirety in the above preview or available to download for free from the link underneath it. 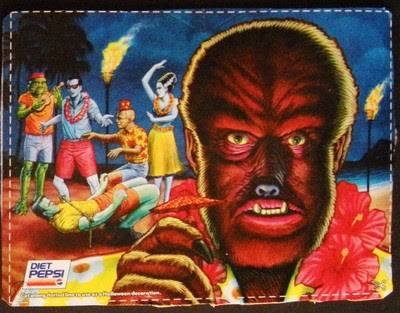