We're nearing the end of our Friday Night Frights exploration of the Crestwood House Monsters books before diving head first into the Zone Base Halloween season. While there's still plenty more books to cover, these last two weeks need to go out with a Friday Night Fright bang! So it's time to pull out the big guns and the heavy hitters to bring the show home. Who better than Frankenstein to do so with?
One of the main Universal Monsters and certainly most relatable, Frankenstein's Monster is an icon of horror. I've loved the big guy ever since getting a Remco doll of him at an extremely impressionable age (I was a freaking toddler). It glowed in the dark and would give you a hug. The hug was a play feature intended as him grabbing a victim, but homeboy just needed a hug. Who doesn't? I got him and my brother got The Mummy. Years later upon moving into a new house, my father acquired a rather large model yacht in which he proudly put on display in the living room. For that yachts lifetime in our home, it bore two passengers. Frankenstein and the Mummy. Who were out for a lovely day at sea.
The book is presented above in it's entirety or can be downloaded from the link under it. Know what, the monster got two more books in the series. I suggest you give them a look too! 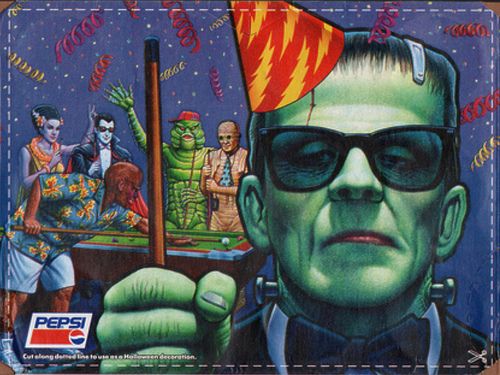