"As evil MEGATRON closes in on the Allspark, BUMBLEBEE and the Autobots need a new commander to help save Earth – you! Assemble your squad and roll out for a battle that will rage from Central City to Cybertron… and even to the local multiplayer arcade! More information to follow soon." Is how the upcoming new Transformers video game is described by Outright Games and Coatsink whom are behind it's creation and release. Not much more can be gathered from that and it's trailer, but it does look neat.

Taking a Cyberverse/Evergreen design approach, it'll be pretty traditional in it's appearance. It's looks like some sort of strategy style game. Of course, who knows really at this point? As long as it's fun, I'm down. I prefer mashing buttons to make dudes jump, shoot, and swing swords than turn based game play. Though, sometimes I can be won over with that style of game.

It's hard not to be excited for a new Transformers game, and I'm looking forward to getting a copy this October. I'll likely get it for my Switch as we have multiple TV docks set up in my house as well as the portable mode to allow me to move room to room while playing. I'd be locked to the living room on our PS4. Not to mention, those graphics scream Nintendo console, and who can ignore the screams of graphics? 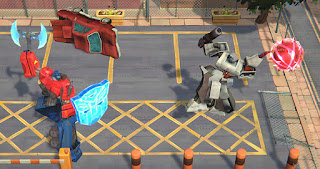