I don't understand my fascination with licensed character meat snack commercials, but fortunately there's an abundance of them to be fascinated by. I've also learned that without spell check, I cannot spell fortunately. This commercial for said meat snack features the heroes of Kousoku Sentai Turboranger selling snack sausages. It's pretty standard fair as far as these things go. Action footage with voice over with a shot of the Red Ranger holding a box.

It's the very end of the commercial that really grabs my attention. Inside each box is a randomly packed Turboranger keshi toy! I don't know if they were the same from capsule machines or brand new figures for this promotion, but that's the kind of thing I go nuts for. I do wonder just how tasty the sausages are? I like meat snacks as is, but the ones here look more like Vienna sausages compared to the Jack Links jerky sticks I normally buy. 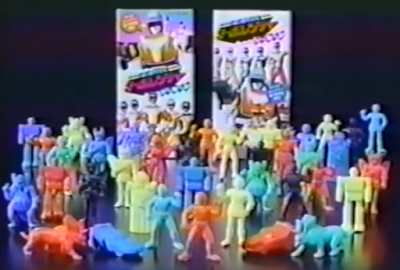