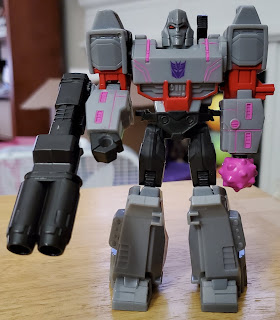 I'd been holding off on a warrior class version of Cyberverse Megatron being happy with his pretty great Turbo Changer toy. That's not to say I wasn't tempted, it was a pretty nice looking figure. After it was retooled to match his season 3 appearance, I knew I had to get one. So I did. The toy in robot mode makes me think of Megatron's Action Master. The colors are off, sure, but the similar visual cues are there. It's possibly one of the reasons I like it so much. 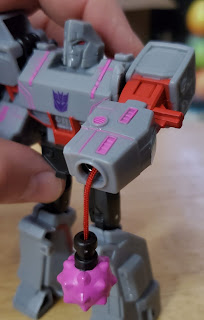 Warrior class figures in Cyberverse have a gimmick similar to Super Powers figures. Megatron's FUSION MACE is a play on his energy mace from that damn dam fight in the original cartoon. With a flick of the lever on his back, Megatron flips his arm about swinging his energy mace like a yahoo. This is actually kind of neat as it unravels from his wrist with a string. Another lever under his forearm will pull it back in place. It's a fun little play gimmick that pays homage to one of Megatron's more memorable moments.

Megatron's alt mode is a Cybertronian tank. Cybertron isn't a real place, so you'll have to excuse it for not looking like a real tank. It's a spacey sci fi type design that looks at home in a old video game. I bet that game has a great soundtrack. I like sci fi spacey designs like this, I bought it right? Why would I buy something I don't like in something that's 100% voluntary like a hobby? Never understood those types. 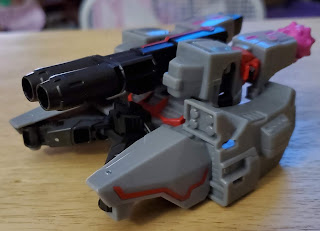 I didn't like transforming him though. It's not complex or anything, there's just a point of annoyance in his legs. Essentially his boots unfold and create the sides of the tank. If you look at the above picture you'll see the seam in the middle where this is done. In the robot mode pictures, you'll notice a peg on his left arm as well as some little brackets under his knee caps.

Those are connection points in the transformation where things lock together. It's super easy to wrench something the wrong way doing this and remember that seam in the middle of the tank side? It came apart right there and had to be snapped it back together a few times. That was frustrating and literally my only real complaint. I honestly bough the toy for it's robot mode than anything, the space tank is just a neat extra.