In Space, Nobody Can Feel Bumblebee Sting 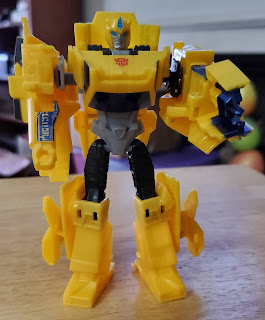 I had been putting off buying a Warrior Class Bumblebee. I haven't gotten any version of Cyberverse Bumblebee in warrior class yet, but when I had seen this newer Cybertronian version solicited, I knew it would be the one to buy. Not that I've got anything against Cyberverse or Bumblebee (if you read the site, you know I quite like them both), it's just the way things have worked out. Representing his 3rd season look, Bumblebee is not very much different from his prior versions. His Cybertronian alt mode is a flying car that's pretty much a modification of his Earth based car mode. It's a little silly, but I dig it. Honestly it looks more like a submarine than a flying car, but still pretty neat.

Bumblebee has a sparkle to his yellow plastic. I don't know if that was present in prior versions, but I notice it pretty clearly when holding the toy in light. BB also features some metallic blue circuitry detailing with the metallic coloring on his Sting Shot stinger as well. It looks really good against the yellow and makes me think of him as a Microman toy. Not just in the way that the original Bumblebee toy was derived from a Microman, but this toy looks like it would fit in next to your Spy Magician figure. His alt mode kibble and spacey alt mode makes me think of him as a newer Micro Robot. He just has that look, or at least to me.

I had mentioned his Sting Show earlier, that's the figures action gimmick. Mounted on his left arm is the stinger, pull said arm down, and it spring loaded pops back up with the stinger spinning. Makes me think of a Kenner Super Powers figure. I really like this guy, he has that old school super robot vibe that Cyberverse warrior class toys generally have. I get warriors for around $11 at my local Walmart and that's a great price. It's a nice little something to grab for not a lot of money during an errand run. 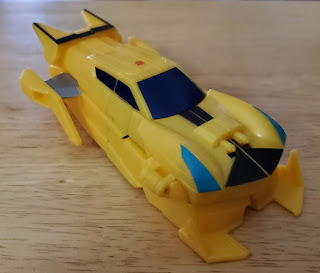