Screaming To The Stars 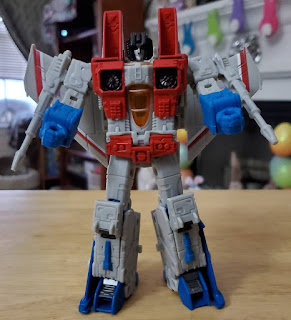 Among the birthday presents from my wife last week was Earthrise Starscream. While I wasn't the biggest fan of his Siege toy (loved the way it looked, just not so much the execution), this I like quite a bit. Seeming like they took the 2006 Classics mold and worked from there, Starscream just works like you expect him too. He's a voyager scale toy, and he really feels more like a voyager toy of old. Bigger and heftier.

Starscream kinda just transforms himself, he just naturally goes into his jet mode. This is a brand new figure and my first time playing with it since getting it last week, but I automatically knew exactly what to do. Either it's from 36 years of Transformers, or just a well executed toy. I'll go with a mix of both.

Starscream turns into his classic jet mode and looks great in both modes. He's exactly what you have in mind when thinking of traditional Starscream. That's what Earthrise is all about, 100% what you have in mind when you think about traditional looking Transformers. It's like the classics model on steroids. It's nice having all these Diaclone designs refreshed and I anticipate seeing quite a lot of customs converting them into those older incarnations. They're also great toys. I fiddled with this guy for seemingly forever today.

I've been admittedly having a little Seeker fatigue the past few years, opting to get just a few of each as opposed to tracking down each one released in a new mold. I'm not sure if I'll go whole hog here, but that Target two pack with Thundercracker and Skywarp looks a lot more tempting now than it did Friday. This is a good Transformers toy. If I have any complaints, it would be in transformation, I had a little hang up with his arms. That was my fault though, not the toys. Nothings perfect, but so far I've played with a few Earthrise toys and have found them all to be near it. 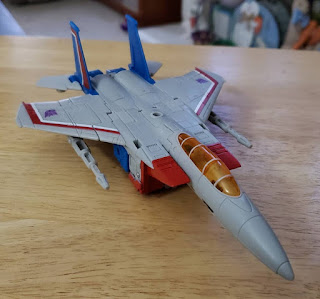