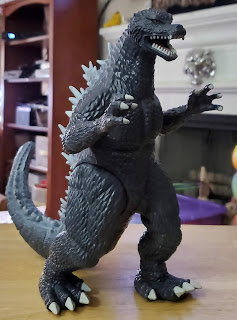 Hey, remember that big Kong I talked about the other day? Well, I can't just not talk about the big Godzilla I also got. Playmates really knocked it out of the park with this large figure of the King of Monsters. Representing his look from Godzilla: Final Wars, this is a really good looking toy. That similar to Shogun Warriors hand feel is here in full effect with a hard plastic body and those satisfying hard vinyl appendages.

Even with the figures limited articulation, it looks full of life as his legs and arms are posed naturally in a ready to fight pose. Which is the definition of Final Wars. If you've never seen the movie, now would be a good time to do so. Godzilla battles a small army of classic monsters as aliens attack Earth. The main characters run around the mayhem in the freaking Gotengo and get into insane battles. This movie is nuts. I strongly advise you take a break in the middle of the film, you'll need one.