Beast Wars began airing 24 years ago. I would say it's hard to believe, but no, definitely has been a long time since then. Do I miss it? Hells yeah I do. Still one of the closest to my heart parts of Transformers, Beast Wars was just special. Looking back at it now, man I really loved that initial Optimus Primal vs Megatron 2 pack. Prior to the show, when the line was essentially Generation 3 with the original characters returning with a new team, this was a set of the classic leaders in animal forms. I was never bothered by the change, though slightly confused by the new team names initially.

Not long after the launch the story was straightened out and the cast was a Next Generation type crew, the two pack was pretty much left in the dust. The new Primal and Megatron toys were larger figures with different alt modes and new characters with throwback names. Still, I've always really liked this set.

The initial basic class toys of Beast Wars had a spring based auto transformation. It was something I thought was pretty cool at the time and don't mind now. The beast modes were pretty good looking, Megatron's alligator worked out better as Primals legs were just folded up against his body. Still the bat looked pretty decent and Optimus had a Batman inspired robot mode. The robot modes were fairly articulated. At the time I would have been happy if Transformers would have just been that size... and I probably would still be now. I liked it, gnaw meen brah? 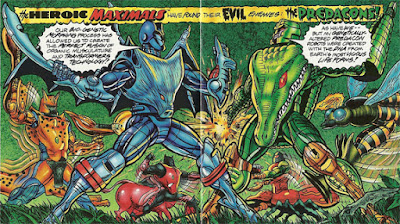