We Had Our Own Damn Con 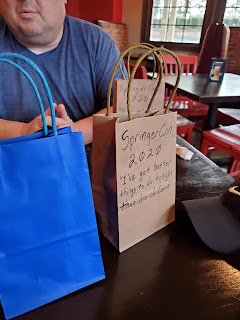 I don't have to tell you all what's going on right now, we all know, we all want it to be over. It is what it is. Of course a lot of conventions were canceled, relating specifically to Zone Base, Toylanta. This is where you're used to see  'in these uncertain times' , but instead, Shawn and I went to Mellow Mushroom and had our own damn con. *edit* At the time, it was supposedly ok to eat at restaurants that were open for dining in. This wasn't a large gathering, diners were spaced several tables away from each other as well.* 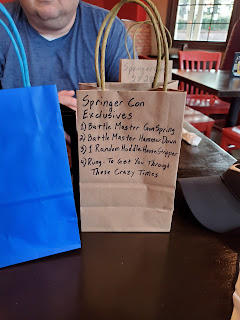 Shawn created exclusives for the event of two six feet away from others eating. Battlemasters Gunspring and Hammerdown made from parts swapped Battlemasters. Rung, because we all need a little help after a week of isolation. And a Huddle House Stripper, his name is Chad. Shawn also brought me a Playmobil horse for my Headless Horseman. Now he can ride into to town for take-out. 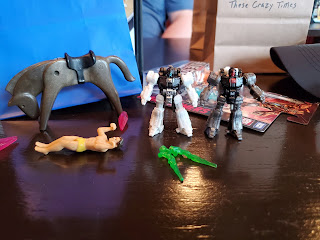 We ate and chatted for hours about random toys and stuff. I had the Pacific Rim pizza... because duh. Shawn opted for a mushroom based pizza because he had to fight Bowser later in the evening. 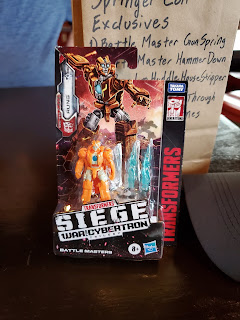 After a while we went to Walmart, which was about 2 miles away and still open. It was there we stood in the action figure aisle discussing the various figures on shelves for hours. As there's a pandemic going on, the store closed early and we continued in the parking lot before heading home.

From Stompers to Star Wars and every Transformer in between, our con was the coolest place in town. Thanks to Shawn for coming out and creating the awesome exclusives and to Mellow Mushroom for being open (really thought we were to get drive through and eat in a parking lot). Aside from the various teenagers filming Tik Tok videos we were the coolest... In hindsight, maybe we should have made one.