One of the best and most enduring things about Masters of the Universe is just how freaking weird it is. Eternia is a world full of science and sorcery, lasers and swords, palaces and haunted caves, living Halloween decorations and musclemen. It's truly a hodgepodge of everything I've ever drawn on a spiral notebook. It's no wonder that He-Man has a cyborg cowboy friend. I mean... why not?

Rio Blast is a cyborg cowboy, like I said above. He has various laser guns that fold out of his thighs, quick drawing from his wrists, and a full over the head unit with cannons. Effectively turning him into a walking tank when he transforms. It's a little crazy and maybe a bit overkill, but if I was faced with the walking horror shows that populate Eternia... I'd probably point every single gun I could at them as well. 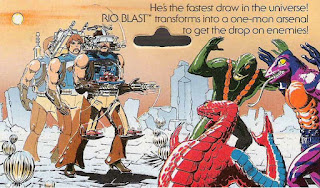 While the designers at Mattel were coming up with various characters, a villain character named Firepower Man was conceptualized. The character found his way to Filmation and became a member of The Evil Horde named Colonel Blast on an episode of She-Ra. By the time the concept reached actual toy though, he was turned into Rio Blast. Somehow.

That's a weird journey from concept to creation, but part of why these things are so neat. Like... Rio Blast's only cartoon appearance was another guy. Weird huh? Either way, he's a cool toy and a cool character. Everybody loves a good cowboy and what a better way to insert one into Etenria than outright overkill?
commercials He-Man Masters of The Universe mattel retro Rio Blast she-ra the evil horde toys Zone Base