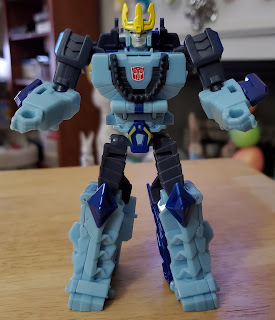 One of the new Cyberverse toys I've been looking forward to the most would be Hammerbyte. A new character in Transformers is a rarity these days, but it doesn't hurt that he's pretty dang neat too. Like all of Cyberverse, Hammerbyte is firmly rooted in old school super robot style. He really feels like a left over design from another line. His sculpting makes me think of an Energon figure. Maybe a little smaller and he'd fit right on in with the Ominicons. 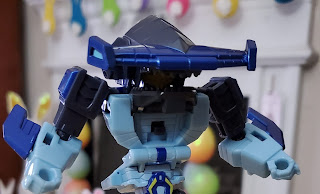 Hammerbyte is a Cyberverse warrior class toy though and like others in that class he features an action feature. His is the 'Rip Thrash' which not only sounds like a Street Sharks character, but results in making him look like one as well. To activate it, you twist his left arm and CHOMP! The sharks head (which is his backpack) snaps forward combining with the shark tooth necklace on his chest. Now Hammerbyte is ready to bite your head off! It's pretty silly and I can't imagine anyone not getting a laugh out of it. Unless you're an asshole. 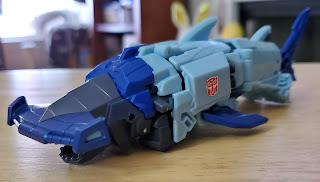 By now I probably don't have to tell you Hammerbyte turns into a hammerhead shark. Unless he was a car that just happened to have a sharks head hidden in it's trunk to use as a weapon and now I really want a toy of that. If you have an aversion to Beast Wars style animal alt modes, you'll be glad to learn that his is a mechanical shark mode. While I love Beast Wars, it's hard not to appreciate just how good those hard angles and robotic bits look on that shark. The shark tooth necklace from his robot mode is a bit of fake kibble as the jaws are actually contained in his shark head. They fold away completely helping the illusion a bite. 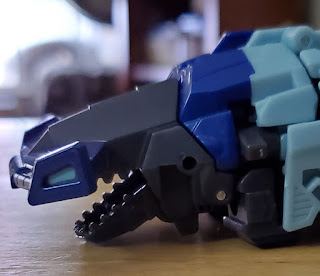 If you can't tell from what I've said here or the pictures used (check out our Easter decorations y'all), I really like this toy. His robot mode is chock full of character with the crown and prior mentioned shark tooth necklace. If anything I wish he had a trident or a harpoon gun. All those various shades of blue transfer into one super pretty toy shark. It was cool getting a new character and even better that his toy was so good. He's just nice, you know? Nice things are nice.