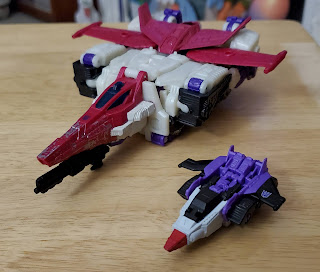 Ever find yourself needlessly comparing things? I was doing that earlier today. My Siege Apeface had sat unopened for a good week until this morning when I finally dug into him. Since I really liked the Titanmaster Apeface toy, I took the time to needlessly compare a $30 toy to a $5 toy. Remember when they used to refer to the internet as the information super highway? Posts like this are one of the reasons they stopped doing that. 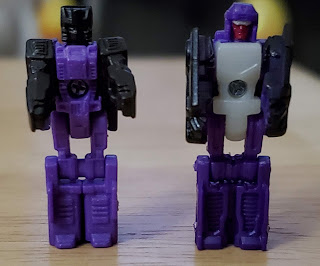 While the jet modes have the same basic shape, they actually look a lot different. I've always thought the Titanmaster (TM for now on) toy looked like the GIJOE Conquest while the Siege toy is clearly based on the original toy. Which is pretty cool that even at vastly different prices and a release difference of 3 years they're visually different toys.

The robot forms of the head modes are pretty different. While the Siege toy has more colors, the TM is sculpted better. The Siege version is supposed to be Spasma and he looks pretty close to the cartoon model. The TM toy is a teeny tiny version of Apeface. While Titans Return was full of homages, they still took a lot of creative liberties, which I dig. The Siege toy is 100% meant to be an updated version of the original and I dig that too. See, you can be of both minds. 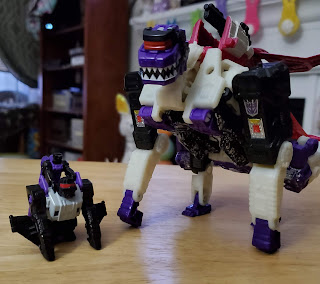 In ape mode, once again we've got two completely distinct toys based on the same character. The TM toy is a cool mech for the main bot to pilot, while Siege once again is the classic toy updated. I didn't care for transforming the Siege toy into this mode. I found it pretty fiddly and probably ended up doing several things wrong. Though this is literally apples to oranges and not really a comparison. It's just a small gripe in an otherwise great figure. 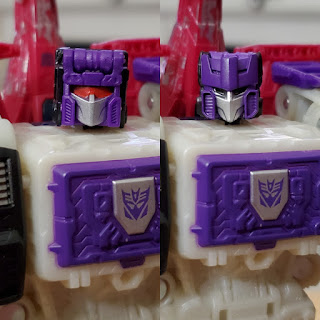 The most distinct difference though is the most obvious comparison point. Head on! Both toys use the same connector system and the TM toy was a much looser fit.  While both are made to look like the original Apeface, the Siege toy once again is clearly based on the original toy while the TM toy is more stylized and visually invoking the Decepticon symbol. Both look really good on the toy... but considering just how much the toy is supposed to be an update, the Siege head looks much more at home.