Buddy L was formed by a pressed steel company after the owner started making toy cars for his son from the steel scraps. I'm not making that up. I felt like pointing that out as the company is mostly known for toy cars like Tonka. Also like Tonka, Buddy L dipped their toes into the robot toy scene of the 80's. Though unlike others during the time, from what I can tell, Buddy L made their own robot toys instead of licensing molds.

Their transforming robots ran the gamut from vehicles to dinosaurs and insects. The most well known would be Robo Tron with it's pull back engines. The toys have been knocked off to hell and back, so chances are you've seen some incarnation of them at some point. They're the robot worlds version of that redneck family member that just shows up at funerals. Who's kid is that?

Charger Tron is amazing though. Combining the toy car launcher gimmick with robot toy, Charger Tron manages to be the cool guy at the gas station you wished you were friends with. The base would be your standard fair launching station complete with spring loaded winding mechanism. However, it's also a robot! The launching car is a sci fi coupe that looks pretty dang cool. Straight out of post movie Cybertron even. As the car rolls from it's launching base, it flips open into it's robot mode.

It's a simple gimmick based toy enhanced with transforming robot parts. The robots are pretty basic, and that's where the charm lies. I could easily see these guys grace the cabinet art in an arcade. The commercial, while basically selling the toys gimmick, does so with the most amazing music to grace a robot toy commercial. It's a shame that it's not more well known. A damn shame. 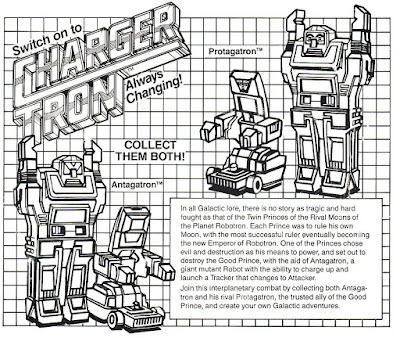