Transforming robot toys are generally pretty popular, but not every transforming robot line is popular. Just like other 'sure thing' products, sometimes they'll be a transforming robot line that just doesn't take off. Playmates launched R.E.V.s (Radically Engineered Vehicles) in 2006, and by all accounts, it wasn't a bad idea. Seemingly combining Stickfa's, Microman, and Transformers gimmicks into a pretty neat toy line. 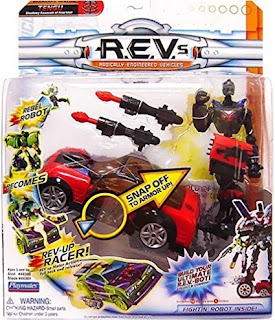 I'd like to say R.E.V.s stuck around for a year, but in all honesty, I don't really remember seeing them for more than a few months. There's not a whole lot about them online either. I've got the green motorcycle guy, and can't remember his name or find it either. Aside from very few pics and videos, it's like it got Mandela Effected out of reality. 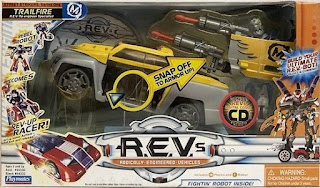 In retrospect, I wish I'd bought some more of the toys. My focus was on other things and they slipped through the cracks of my attention. I do remember thinking the one I did buy was neat, it's a cool toy. The guy can ride his motorcycle or merge with the parts. That's a pretty solid robot based toy and by all means should have sold better. Maybe on the other side of that Mandela Effect, it's enjoying a long running sucess.
2006 commercials Mandela Effect Playmates r.e.v.s retro revs robots toys Zone Base