Lon Chaney Jr. was best known as The Wolfman in The Universal Monsters movies. If you swing by the Mego section of your local Target, you'll see an action figure of him as a werewolf alright... but not the Wolfman. It's a figure of of his werewolf character from "Face of the Screaming Werewolf". I'm guessing the rights were dirt cheap or free for Mego here. I'm not sure if the movie is even public domain, just nobody cares. Which is unfortunate as it's one of Lon Chaney Jr's final performances.

If you don't watch the entire movie above (it's only an hour), let me explain the "plot". Two mummies are found in a pyramid. One just happens to be a werewolf. 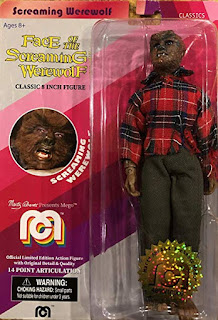