In the late 80's there was a very popular movie called Three Men and a Baby. A comedy about three crazy bachelors who get stuck with a baby. It's in the name. Then things took a dark turn. Somebody noticed a ghost in the background for a split second. Turns out the apartment the movie was filmed at was the scene of a suicide and the ghost of the kid whom committed suicide appears in the background for a split second.


Local news in every area reported on it, I strongly recall TV showings warning viewers, suddenly this silly movie became the cursed ring tape. I was all of 10 years old. In the time of satanic panic and now this movie I taped off HBO was now another tool of the devil. Did you hear? That guy who lives down the street is a satanist and he kills kids in the woods. If you watch the movie at 3am with all the lights out, you'll see the ghost and kill yourself.

Before long the movie faded away, people to uneasy to watch it anymore. A sequel came out and depending on who you asked it might have been a cover up attempt. Eventually it became one of those ghosts stories told around groups of friends. Maybe at a camp fire, maybe a sleep over, maybe just around the office. I was in my early 20's and still had the creeps about this ghost kid. Everyone did, it was true face of horror. 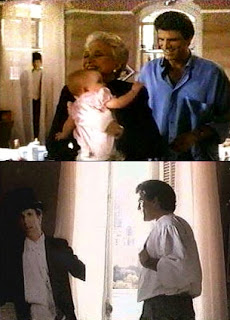